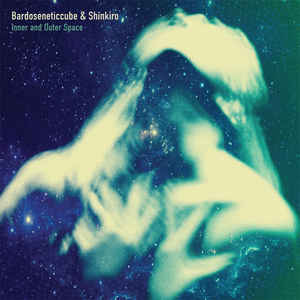 Background/Info: This work resulted from the common efforts of Bardoseneticcube (Russia) and Shinkiro (Japan). Both artists are already active for a couple of years now and have already released an album together under the Bashin moniker. This album entitled “Four Noble Truths” got released in 2011 on Athanor (France).

Content: This album reveals 5 compositions leading the listener in a quite progressive, but dark and somewhat cellar-like sound universe. You feel like you are walking through endless corridors where haunting sonic waves  progressively come down on you. From high resonating and sharp noises to low, vibrating sound vibes this work will give you an instant freaky sensation.

The work sounds like it is being reinforced by aquatic field recordings (or samplings) while a kind of industrial-ambient sounds can be heard as well. “Inner And Outer Space” is an imaginary exploration of a doom- and hell-like sound universe where an endless darkness will fall over the poor visitors.

+ + + : There’s a cool progression in the global composition, which mainly comes through during the first cuts and the great debut track. This is a work with some strong visual appeal.

– – – : The progression of the tracks sounds cool although doesn’t reveal any kind of climax so in the end –and especially on both last cuts, there’s a stagnating aspect running through this work.

Conclusion: If this work is meant to explore different aspect and corners of space, it for sure will rapidly become a kind of nightmare made of terrorizing sounds and disturbing passages. It will however appeal for lovers of extreme sensations in sound.