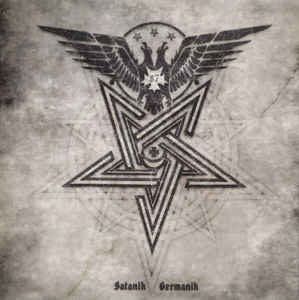 Background/Info: This year Hanzel Und Gretyl celebrates their 25th anniversary. The new album “Satanik Germanik” also is the first one in four years time. The work has been introduced as their darkest- and most metal driven album to date.

Content: The Gregorian-like intro song doesn’t reveal the real content of this opus, which indeed is driven by heavy dark-metal assaults. Furious guitar riffs and fast rhythms invite the listeners to join the uncompromised and merciless sound universe of the New-York based formation.

Even if it clearly sounds as their most metal-driven work, there still is an industrial touch emerging from some arrangements. So in the end the album remains easily recognizable, but definitely harder than what they’ve done before.

+ + + : Hanzel Und Gretyl deals with a nu-metal format although the songs are still pretty rock’n’roll like. It’s all about spirit! The band strikes back with humor (cf. “Trinken Mit Der Kaiser ‘Die Bierz From Hell”) and a bit of provocation, which both remain their trademarks. But I also like their ultra-dark approach, which sometimes becomes pretty freaky and even tormented (cf. “Sonnenkreuz”). The vocals are expressing rage, but I also like the somewhat sterile female vocals running through “I Am Bad Luck”.

– – – : Reminding me of the early releases of this band I regret the explicit metal direction they’ve taken and now exposed at “Satanik Germanik”.

Conclusion: The success story of Hanzel Und Gretyl is characterized by a powerful mix of metal- and industrial music, a special care for image and provocation and some sense of humor!