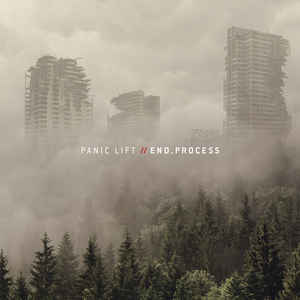 Background/Info: Panic Lift is now already active for numerous years and has now released their fifth official album to date. The American formation became an established band from the Metropolis roster for whom they now have accomplished 3 full length albums plus a few EP’s.

Content: Panic Lift has something versatile. Each new opus sounds a bit different and that’s already true for “End Process”. Without saying that they’re taking us back to their earlier work I experienced the new songs as harder again; more electronic and industrial while leaving their ‘pop’ aspect more behind.

The band around James Francis brings different influences together. There’s a duality running through the songs and the vocals as well. It feels a bit like the sonic exposure of Dr. Jekyll and Mr. Hyde. Electronics, guitars and heavy drum sections create a real complementary production.

+ + + : Speaking for myself I consider this album as one of the best they’ve composed since their beginning. Even if it remains nearly impossible to define the sound of Panic Lift, there’s this mix between dark-electronics and industrial resulting in a harsh and well-crafted album. The different influences are pretty complementary while I have a preference for the hard-hitting opening piece. I also like the real special and somewhat schizophrenic vocals production.

– – – : Panic Lift remains a band I can’t totally seize. Each production appears to be a new sonic journey and even if I like this kind of experiences, I’m missing somewhat cohesion between their different releases. But you will not hear me to complain about this new one!