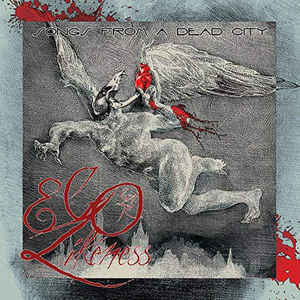 Background/Info: Ego Likeness was set up in 1999. Driven by core members Steven Archer and Donna Lynch the American formation gained some recognition in the electro-pop scene. This opus brings us back to the early days of the band. The title of the work brings us back to their self-released debut work (1999) while the second disc features (previously unreleased) demo material.

Content: This album brings us back in time and yet it sounds pretty contemporary and original. Ego Likeness always has been a unique electro-pop band for merging pop elements together with trip-hop and a very personal experimental touch on top. The vocals are somewhat half spoken half sung, which creates a perfect twist with the music. Donna Lynch is the main singer, but there are a few interesting duo parts together with Steven Archer. The cadence remains pretty slow while the atmospheres fueling the songs are ultra dark.

Next to the 10 songs from the first disc we get 8 more songs on disc two. Ego Likeness here moves on with their electro/trip-pop experiments and you hear can hear it’s more demo-like. I however noticed more sensitive passages (cf. “A Proper Goodbye”) next to one of the hardest cuts from the album (cf. “16 Miles”).

+ + + : This album doesn’t really suffer from the weight of time and I think it’s a damned good thing this early work –and especially the main disc, has been finally ‘officially’ released. It clearly doesn’t sound like their best work to date although “Songs From A Dead City” has something avant-garde like. I also like the atypical approach of Ego Likeness, which clearly never jumped on fashion trends. This work has something intimate and mysterious while the second disc reveals the beautiful sadness from the song “A Proper Goodbye”. This work stands for dark-, but delicious reverie.

– – – : I would have preferred to hear a new opus by Ego Likeness although this earlier work is a cool gift. I already said it’s not their best work in history, but clearly the basis they used to move on with.

Conclusion: Ego Likeness takes us back in their sound archives, bringing their first self-released work to life. The fans are going to love it!