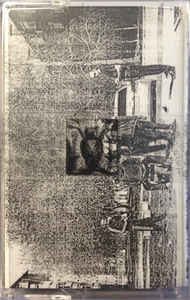 Background/Info: Gopota resulted from the common efforts between the projects Empty Chalice and Obozdur. I last year discovered this new noise-formation by the “Knots Of fear”-album.

Content: This new opus features 5 tracks, which are driven by noise treatments, but mixed with overwhelming dark-ambient atmospheres. The ambient input injects a more accessible element to the work, which has been even reinforced by some ghost-like voice passages.

There also is a solid experimental influence running through the work. It mainly consists of field recordings accentuating the visual strength of some tracks.

+ + + : “Music For Primitive” moves towards a more accessible yet still extreme sound creation. I like this evolution for its visual appeal. The industrial crashes and sharp noise treatments create a delicious fusion with the numerous field recordings. “Meaningless” is a noticeable song in the genre. This new work is also more elaborate and I was especially impressed by the diverse sound manipulations. The addition of a few vocal lines also is an interesting move.

– – – : Even if the songs are quite long in duration I think it’s a pity we only get 5 cuts. The intro cut is not exactly the most exciting one. The experimental and somewhat abstract approach still isn’t the most accessible aspect of the album.

Conclusion: Gopota is progressively experimenting new influences and really seems to have found their sonic path. This is an interesting twist between noise and dark-ambient music.