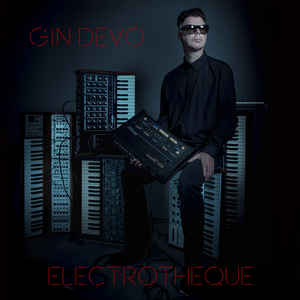 Background/Info: Gin Devo will always be linked to Vomito Negro, which remains one of the essential dark-electro/EBM formations from the early 90s. Next to Vomito Negro, Gin Devo also released music under his own artist name and I especially remember his minimal-EBM album “Errata” (2012) released on EK Product. He also released the “Surface”-album, which was something different and more experimental. A new album has already been announced and Gin Devo even revealed to be inspired by Clock DVA.

Content: “Electrotheque” has not that much in common with Clock DVA. It quickly appears to be a different work composed by an impressive arsenal of analogue gear. The front cover clearly indicates where the Belgian master got his influences from. “Electrotheque” is an old-school electro album revealing the magic of good-old (modular) synthesizers.

The songs remain instrumentals. They’re pretty minimal-like and often carried by deep, dry bass lines and beautiful, reverie synth passages. It sounds a bit soundtrack-minded, but also hides a few little surprises like the nu-disco driven “In This Heat”.

+ + + : I expected a totally different work from this new album although I have to admit that the sound of pure vintage/modular/analogue synths is something magic and incomparable. Gin Devo is a trained and talented operator who clearly knows his machines. He also confirms to have a wider arsenal of influences than only composing EBM-driven songs. The sound remains pretty dark although there are a few little surprises like the nu-disco sounding “In This Heat” featuring sequences à la Donna Summer. I’m more into the minimalism of songs such as “Adhesive” and “Echo Path”.

– – – : From time to time Gin Devo likes to take his fans by surprise revealing another side of his talent. This work has less in common with Vomito Negro although it has been composed with the same gear. The cinematographic and somewhat experimental approach is not that accessible and I’m especially missing a few vocal parts.

Conclusion: “Electrotheque” is an appropriated title, which sounds a bit like an artist who’s promoting his studio. It’s a surprising and yet well-crafted opus although not my favorite.