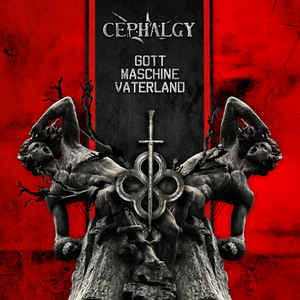 Background/Info: Six years have passed since the “Leid Statt Liebe”-album released by Cephalgy. This German formation is an established EBM/dark-electro band, which fills this hiatus of 6 years with their fifth official studio album featuring 14 songs.

Content: The title of the album, which can be simply translated as “God Machine Fatherland” can be understood as an indication about its content. “Vaterland” clearly refers to their homeland Germany and the song sung in German while “Gott Maschine” might indicate the fascination for electronics. Whatever the deeper meaning of this work, it clearly is a hard-hitting opus mixing EBM together with dark-electronics. I also noticed some darker pop elements on top of the work, which make the composition more catchy. The symbiosis between all influences reminds me of a harder and EBM-driven version of Blutengel.

Most of the songs have been sung in German, but you also will notice some English passages. One of the most noticeable cuts consists of a great duo featuring female backing vocals.

+ + + : To be totally honest with you, I was never a huge fan of Cephalgy, but this new work is real ‘tour de force’. You sometimes need to take a break to get new inspiration resulting in a great accomplishment. “Gott Maschine Vaterland” is my personal favorite Cephalgy album, which features several potential hits. I’m not that surprised the album already received very positive reactions in their homeland.

The mix between EBM and some darker electro-pop elements is phenomenal. Cephalgy doesn’t emulate an easy sound formula, but tried to get their sound danceable while remaining dark. It still sounds powerful on one side and more accessible on the other. The female backing vocals are another great aspect of this work.

– – – : I don’t have real minus points, which says a lot about the content of this work!

Conclusion: Cephalgy strikes back with power, but still with elegance. This is an artistic and styled piece of modern EBM.