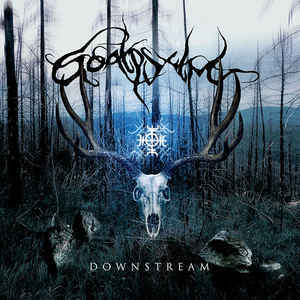 Background/Info: Goatpsalm is a Russian formation I never heard of before. The 4 head combo has already been active for a couple of years and has released previous material in 2012. They now strike back with a new opus featuring 7 songs.

Content: The take off is absolutely freaky for mixing dark elements like ritual music and gothic atmospheres with spooky vocals and heavy guitar riffs. The song is pretty atmospheric and like announcing a dangerous situation. The ritual element is progressively evolving into elements of doom and metal as well.

A few cuts are more into obscure ambient atmospheres. These cuts are shorter, but only a prelude to a heavy final apotheosis.

+ + + : The debut song is an impressive and overwhelming piece of music. The ritual element is ultra present and appealing to dark fantasies. The ambient input sounds pretty oppressive and obscure. Some of these cuts remind me a bit of The Devil & The Universe for the ritual element while Goatpsalm added an explicit metal touch on top.

– – – : The softer cuts can be seen as an intermezzo, but these tracks aren’t the most fascinating side of the band.

Conclusion: I get the impression that there’s more potential in this band than what came out on the album. The ritual aspect mixed with ambient, industrial and metal is absolutely accomplished and fascinating.