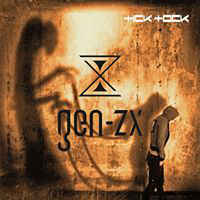 Background/Info: Gen-ZX is a brand-new German duo driven by two familiar names of the electronic scene. The music has been composed by upcoming talent Jan Laustroer (Antibody) while Marko Hein (Frame Of Mind) takes care of the vocals. “Tick-Tock” is their debut work featuring 7 songs. It rather looks like a mini-album instead of a full length.

Content: The main difficulty with Gen-ZX is to define the music genre they’re dealing with. They bring different sources of inspiration together, which can be resumed as EBM, industrial and techno with some punkish and experimental touch on top. The production remains raw and unpolished, which makes me speak about ‘punk’.

+ + + : “Tick-Tock” is hard to define and therefore definitely an atypical production. The songs are rather elaborated while mixing different influences together. Jan Laustroer remains one of the youngest artists active at the scene and even if he still has to grow in the global writing- and especially production process, he really shows interesting ideas. That’s probably why Marko Hein who could be his father started a project with him. They belong to different generations, but are definitely sharing a similar passion for electronic music.

– – – : The sound production remains maybe intentionally unpolished, but this way it also suffers from a real professional sound recording. That’s according to me what they’ve to improve. The atypical approach in sound can’t fully convince me although it’s an approach I like and I want to encourage them to go on with it.

Conclusion: Gen-ZX couldn’t convince me, but I’m sure this band has a potential to move on. I think they mainly need a talented producer to learn them some tricks and improve the sound mix.

Best songs: “Building A World On My Own”, “Illusions”

Since you’re here … … we have a small favour to ask. More people are reading Side-Line Magazine than ever but advertising revenues across the media are falling fast. And unlike many news organisations, we haven’t put up a paywall – we want to keep our journalism as open as we can. So you can see why we need to ask for your help. Side-Line’s independent journalism takes a lot of time, money and hard work to produce. But we do it because we want to push the artists we like and who are equally fighting to survive. If everyone who reads our reporting, who likes it, helps fund it, our future would be much more secure. For as little as 5 US$, you can support Side-Line Magazine – and it only takes a minute. Thank you. The donations are safely powered by Paypal.
Tags: EBM, Gen-ZX, Infacted