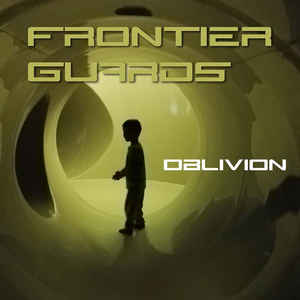 Background/Info: Hailing from the Czech Republic the Frontier Guards duo has released its fourth full length album. The audio-visual project featuring master mind Martin Pavlík (still involved with Beamship and H.E.E.L) and visual artist Tomas Galle (still involved with H.E.E.L) joined hands with Advoxya Records for their new work. I’ve been following this band since the very first album “Predestination” (released in 2008 on Aliens Production), which revealed a great and progressive electro-sound close to IDM.

Content: Frontier Guards hasn’t lost their initial taste for sophisticated electronics, which sometimes reminds me of Clock DVA, and has elaborated their work with dark-electronic influences. The evasive atmospheres and bombast also remind me of THYX. The vocals are more important on this album although the great final part of the work features several instrumental songs. The IDM touch is more present in this epilogue while the influences are moving towards technoid treatments and trance passages.  Both last songs are remixes by the Russian project Mirum Mulier.

+ + + : The sound intelligence of Frontier Guards remains the same, but the sound became more diversified throughout the years. They’ve created a very own sound approach and well-crafted song structures, which might be described as the offspring between Clock DVA and THYX. This band clearly strives for a very own sound approach based upon numerous little details, great sonic effects, evasive atmospheres and refined arrangements.

– – – : I still remain nostalgic of the debut-album, which was maybe less mature, but more into the Clock DVA sound intelligence.

Conclusion: Frontier Guards is one of those bands not a lot of people are probably familiar with and yet I’m nearly sure they have a sound that will catch the attention of a wider audience like music fans listening to Clock DVA, Mind.In.A.Box, THYX, Haujobb and related bands.