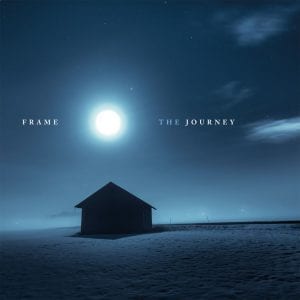 Background/Info: Eugenio Vatta and Andrea Benedetti are based in Rome (Italy) and involved with sonic projects since the 90s. Frame is their common project, which they now signed to Glacial Movements to unleash this album of ten tracks. “The Journey” is an imaginary astral visit of planets.

Content: “The Journey” is an invitation to join a sonic trip throughout different sound manipulations. The work is comparable to a soundscape driven by ambient influences. But it also has something abstract and experimental. It feels like it is focused on sound creation and manipulation instead of what we commonly call ‘music’. Buzzing sound waves, boiling atmospheres and multiple noises (and field recordings) have been merged together.

+ + + : The work is moving in between anguished passages and pure prosperity. It’s a work you can relax to but still become afraid of. The progression of the compositions is very slow without really reaching an ultimate point, but always catching the attention. The more elaborate “Neptune” is my personal favorite.

– – – : There’s not a lot of diversity between most of the tracks, which often is a trademark of a soundscape. You get the impression of  listening to an endless, single cut separated in 10 chapters.

Conclusion: “The Journey” resulted from the passion of two Italian artists for sound creation and decomposed noises instead of a classical music composition.