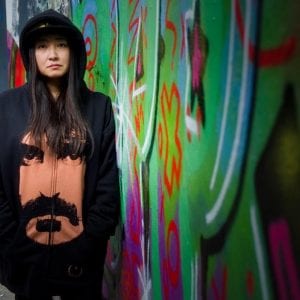 Viviankrist is a minimal electro/power-noise project set up by Japanese female artist Eri Isaka. Around 1997-1999 she was member of the industrial-noise project called Vivian Krist. People started to call her Vivian. She got involved with other bands and became member of the female project Gallhammer. It also was her last band before she set up her solo-project Viviankrist. Eri Isaka is now living in Oslo (Norway) and has released her official CD-album debut entitled  “Morgenrøde” on Cold Spring Records. The production is electro-minimal like, but still spiced with heavier power-noise influences. It’s a bit atypical, refreshing and definitely worthy of examination.

Q: How did you come to set up Viviankrist, which sounds rather different and definitely more electronic/experimental than Gallhammer?

Eri: I stopped making music in 2011. In 2017 I just wanted to do some noise with my bass, but it didn’t go well. Then I found an old MS-10 and Micro Korg, which my husband just put in a closet. It was something very interesting and I just made my first demo in 3 days with those synths.

Q: I read you’ve been inspired by numerous ‘metal’ bands/music when you were involved with Gallhammer, but what do you consider as your main sources of inspiration for Viviankrist and how do you try to put them into sound?

Eri: Ah. There is a lot to mention. I liked the early work of Klaus Schulze, the period of “Irrlicht”. And these days I’m into the work of artists like Prurient, Pete Swanson, and Trap Music, but also some hiphop. I’m still a bit into ‘Japanoise’; when I was in Japan I especially liked Painjerk and Keiji Haino. I also like some German formations like Kraftwerk, Neu! etc.

Q: You set up Viviankrist in 2017 and have already released an impressive number of -mainly digital, productions. Where does this creativity comes from and what makes you first CD-album “Morgenrøde” maybe different from the rest?

Eri: I just kept on making something; maybe just from boredom, but “Mørgenrode” was a little bit different. I considered to release it as physical material when I was busy with the recording of the album.

Q: The first and last track from “Morgenrøde” reveal a heavy power-electronics/noise approach while the other songs are more into electronic experimentation. Tell us a bit more about these different sides in your composing process?

Eri: I grown up with ‘Japanoise’ so the ‘noise’ approach is natural for me. And I really like Klaus Shulze and Ash Ra type of music. So I just did what I wanted to do in that period, dealing with different influences.

Q: Do you’ve some specific criteria when composing your sound?

Q: I’ve been always intrigued why the kind of music you’re dealing with is nearly all the time composed by male artists. Is there an explanation to this phenomenon and how do you see yourself evolving with Viviankrist?

Eri: I don’t know and I never have cared about gender. But you can find a lot of female artists in electronics and extreme metal! I’m just one of them.