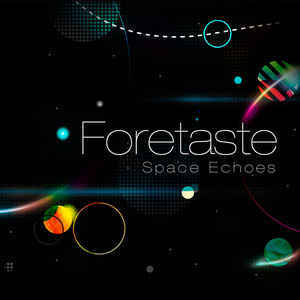 Background/Info: The French Foretaste duo consisting of ‘XX’ (vocals) and ‘XY’ (machines) has already released so many cool albums on the French BOREDOMproduct. “Space Echoes” is their first album in 3 years revealing 11 songs. We previously already discovered the song “Lost In Space” taken from the self-titled EP plus 2 remixes of other songs featured on the new album.

Content: Foretaste remains faithful to their typical electro/synth-pop sound, which is carried by deep bass lines and bleeping sequences. There always is a vintage touch running through their work, which is mainly characterized by dry snare drums and multiple sound effects reminding me of Kraftwerk. A few tracks are even moving a step further, becoming more experimental.

The vocals remain sweet and somewhat fragile, but still icy and sensual. The timbre of voice of ‘XX’ sometimes reminds me of Propaganda.

– – – : I experienced this new album as their most intimate one, maybe the most personal work they’ve ever made. But at the other side it also is the less accessible one when it comes to mention ‘danceable’ cuts. There for sure are several danceable songs featured, but most of the songs are more like inviting the listener to sit down, relax and simply listen. That’s a rather new item when listening to Foretaste.

Conclusion: Foretaste remains faithful to their great sound formula mixing vintage elements together with a personal touch. The music remains a beautiful exposure of creative electro-pop. “Space Echoes” sounds as their most personal work to date, but unfortunately not their best one when it comes to find potential ‘hits’. It however remains a great formation and a beautiful album you have to discover.