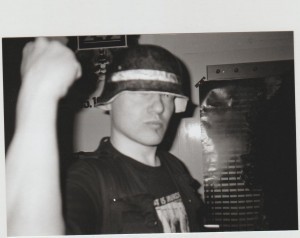 Based in the Southern part of Germany Throbberstalk has been active in between 1995 and 1999. The band was driven by dark-electronic music mixed with obscure atmosphere and industrial elements. Years after the band’s split they got contacted by Monopol Records to release their work for the very first time on CD format. “Lest We Forget” got released in 2012 while we this year discovered “From Nought To Nowhere”. I got in touch with Lars to get back into the 90s and evoking possible further work.

Q: Can you briefly remind us who’s hiding behind Throbberstalk and what has incited you to set up this band?

Lars: The person behind Throbberstalk is me, Lars, but as other people sometimes were part of the creating process I rather prefer to call it a project than a band.

Before 1995 I was recording music in the neo-classical gothic style together with a friend. But we developed into different ways and so we had to split. He moved into drum’n‘bass and I moved into dark-electro stuff. This was nothing planned and I also never had the need of spreading a message or teaching people. So Throbberstalk was just there for my very own pleasure, discovering new sounds and at the same time it was a kind of therapy.

Q: You were active in between 1995 and 1999 so what did you keep in mind from the active years and what have been your main sources of inspiration?

Lars: It was a wild time, everything went into extremes. I had some horrible relationships and at the same time moments of unbearable happiness, especially when I was able to put all the pain, the pleasure, all disappointments and hate into a song. It was like hiding it all in a box -out of sight, but still there…

My main source of inspiration were -of course, girls. Especially the live performances were remarkable. During the first performance in April 1996 a guy with a megaphone jumped on the stage during my show and was shouting weird things. And while performing a song in October 1996 somebody screamed ‘Fuck You!’ over and over again. I wanted to scare this person and I took an axe (which was part of the show) and smashed it into a kind of fence that was placed between the stage and the audience. After the show SALT (from Ant-Zen records) came to me with a slightly greenish and pale face and said ‘Wow, Larsi, that was really close! You almost hit me….’ He had video-taped the show and so I had the chance to see how close it was. Damn – that really scared me…

Q: I read that :Wumpscut: was impressed by your music and even used some of your sounds and patterns while I noticed he also composed a song entitled“Throbberstalk”. Can you reveal us more details about it all?

Lars: The song “Throbberstalk“ was done long before the project Throbberstalk and there is no connection between. But Rudy (:Wumpscut:) and I met quite often after his “Dried Blood”-CD came out, and of course we inspired each other more or less… After his “Embryodead”-album was out for some time we lost each other out of sight.

Q: Monopol Records discovered your work and decided to release it on CD format for the very first time. That’s a rather crazy story especially for a band that stopped all activities since 1999. How did it all happen and what do you think about both albums released on Monopol Records?

Lars: I can assure you -I was almost shocked when Michal from Monopol Records asked 15 years after we had met the last time if I liked to have my old stuff released. After so many years I never expected somebody to remember Throbberstalk and gone release any of these tracks. Unfortunately all master recordings were in a horribly bad condition and Michal didn’t spare any effort to erase all the noises and distortions from the masters. The result is far from being high fidelity, but it is the best we could gain. The master archive contains songs with a playing time of almost eleven hours, so Michal did a great job with his selections.

I love both regular albums and also all the bonus CDs. Sometimes I ask myself what might have happened if they were released two decades ago…

Q: The question is to know if there will be ever new music composed by Throbberstalk? I mean you composed real intelligent music so why not getting back into business again?

Lars: It wouldn’t make any sense to continue what ended more than 15 years ago. So therefore I’m quite sure that there won’t be anything new of Throbberstalk. Even if I ever recorded again, it would surely sound completely different.

Q: Are you still interested in the electro-underground music of today and what’s your opinion about it?

Lars: To be honest -when I stopped recording music, I also stopped being an active part of the ‘scene’ and therefore I have absolutely no idea what is being played in the clubs today. But I still have my old albums of Click Click, Placebo Effect, Dive, Coil, Front 242, Clock DVA and so many others. Now and then I put them on and they are still unbeatable…