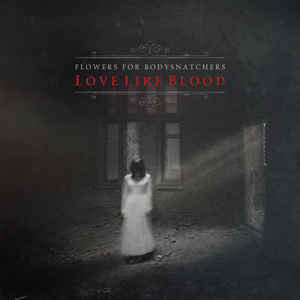 Background/Info: After Rosenshaul, Duncan Ritchie set up Flowers For Bodysnatchers. He was immediately signed to Cryo Chamber and last year released the debut album “Aokigahara”. He also self-released a digital album “SOLARIS” and now strikes back with his second full length on Cryo Chamber.

Content: “Love Like Blood” definitely moves into the realms of dark-ambient music, but it also is filled with reverie. The dark-ambient inspiration has been achieved with a kind of neo-classic approach played by piano and cello passages. It creates a moody atmosphere, which is however characterized by feelings of isolation and despair.

The album also reveals multiple sound treatments and noises. Ritchie clearly added numerous field recordings (or samplings) to his work. The sphere hanging over his work is constantly dark and sometimes pretty chilling by the addition of some echoing sounds. I’ve also a bit surprised to hear a kind of IDM input emerging at “The Life I Ruin”.

+ + + : I like the global approach of this work, which mixes dark-ambient with a subtle and more artistic input of classical instruments. The influences become complementary, but the atmosphere of the work remains pretty dark. The evasive element of the work is beautiful and could be suited for a soundtrack. “Love Like Blood” reveals another side of dark-ambient music.

– – – : If “Love Likes Blood” clearly features dark-ambient influences, it’s not the kind of work that will give you goosebumps. There’s maybe too much reverie to please dark-ambient die-hard fans.