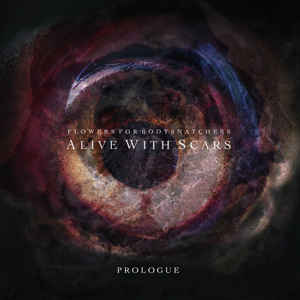 Background/Info: Duncan Ritchie better known as the sonic instigator behind Flowers For Bodysnatchers is back on track unleashing his fourth official full length on Cryo Chamber. The Australian artist likes concepts, but this one goes much further. “Alive With Scars” deals about the terrible neurologic disease of MS (Multiple Sclerosis) whereby Ritchie is living with for almost 10 years.

Content: The most terrible dramas might be the greatest sources of inspiration for artists. Flowers For Bodysnatchers transformed the disease into a sonic exposure characterized by field recordings, long cinematographic passages, anguishing noises and overwhelming atmospheres. From time to time you might notice a ritual element –like in some rhythm patterns. There also is a kind of neo-classical approach running in a few passages.

+ + + : It’s hard to imagine how such a disease really feels and the way it affects your life. But the album clearly creates the illusion of loneliness, like being abandoned in a world without real life. The work has something pretty visual, which is created by mysterious sonic passages. There’s a kind of rhythm running through “Vertigo” creating this ritual sensation and, which also is one of the noticeable tracks from the work.

– – – : Flowers For Bodysnatchers remains an interesting project dealing with poignant concept, but I’m often missing a kind of ultimate climax in the work.

Conclusion: This work has something desolate and it’s maybe not my favorite work from this project, but definitely the most personal one!

Best songs: “Vertigo”, “And Then, Silence”, “A Heart Less Darkened”.