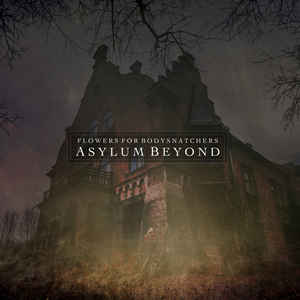 Background/Info: Australian composer Duncan Ritchie is one of those prolific dark-ambient artists who needs no rest after having released an album. He released an impressive number of productions in a rather short lapse of time. “Asylum Beyond” is based upon the murders of Ernest Semenov, which were quite ritual-like. He got imprisoned in an asylum to get treatment. The Ravenfield Asylum got consumed by fire and the police discovered bodies of patients and staff murdered in a way reminding me of Ernest Semenov.

Content: This is an interesting concept especially for a dark-ambient composition and which has been accentuated by the image on front cover. Flowers For Bodysnatchers creates a spooky atmosphere accentuated by piano play reminding me of old black & white movies. The work has been composed by multiple noises and heavy, monstrous sound blasts. Field recordings inject some authenticity to the work.

+ + + : “Asylum Beyond” sounds a bit like awakening the ghosts of the murdered and burnt victims of the asylum. I like this visual power of music, which has been meticulously created by an impressive arsenal of noises and field recordings. You can hear the tick-tack of a clock, which sounds like announcing an unavoidable disaster. The spooky piano play comes back at regular basis and reinforces the disturbing mood hanging over this work. Deep breathing sounds and lost whispers are haunting the listener on this ghastly voyage.

– – – : I’m not a huge fan of the intro- and outro-tracks. They perfectly fit to the concept and especially the atmosphere of this work, but aren’t exactly adding a bonus. I think it would have been interesting to hear some ritual passages symbolizing the way Ernest Semenov killed his victims.

Conclusion: Flowers For Bodysnatchers transformed a horrible event into a frightening music experience. This way music becomes somewhat supernatural and “Asylum Beyond” a kind of sonic sorcery.