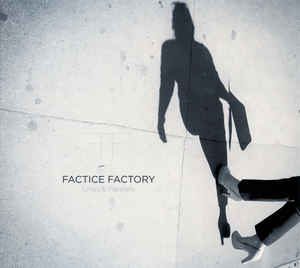 Background/Info: French-Swiss formation Factice Factory has accomplished their third full length. They self-released their previous and successful album “Nada”, which was also released as cassette on the Belgian label Wool-E Discs. “Lines & Parallels” got released as both CD and cassette on Wool-E Discs while Wave Tension Records (small label from The Netherlands) released the album on vinyl- and digital format. The trio Fabrice Lefebvre (known from his involvement with the beautiful ritual and ethereal Rajna project), his son Théotime Lefebvre and singer François Ducarn got the contribution of Rajna singer Jeanne Lefebvre on one of the songs.

Content: Just on previous work I’m once more surprised to hear another band than Rajna featuring Fabrice Lefebvre. The music is totally different, Factice Factory being clearly inspired by 80s cold-wave. Some guitar parts remind me of The Cure, but globally speaking “Lines & Parallels” is much darker. The guitar- and bass parts sound in the purest spirit of the 80s while the electronic arrangements add this little bonus to get it more harmonious. The vocals are adding some diversity to the work for being sung in German, English and French.

+ + + : If you like cold-wave music and you’re nostalgic of the 80s, “Lines & Parallels” clearly reveal multiple parallels with this golden decade of dark music. I especially like the guitar playing for the somewhat fuzzy approach. The global production is pretty cold, even a bit sterile, but definitely in the truly 80s spirit. After the successful “Nada”-album Factice Factory strikes back with a similar cold elegance. There’re several noticeable cuts featured and I also have to mention the song (cf. “Sway”) featuring the spoken vocals of Jeanne Lefebvre.

– – – : The album only features 9 songs and a bit more than 30 minutes of music. That’s pretty typical for 80s releases, but I would have liked to get a few more cuts… because this is a great band!

Conclusion: Factice Factory is not exactly the most famous name active at the wider fields of cold-wave music, but it definitely is a band you’ve to discover. They of course don’t reinvent cold-wave, but they play it with passion and efficiency!