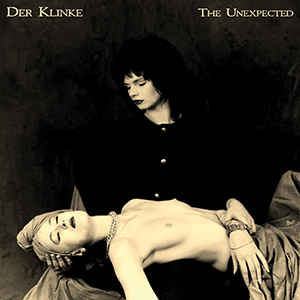 Background/Info: After having released their three previous albums on Echozone, Der Klinke joined hands with the Belgian label Wool-E Discs. I’ve not always been convinced by the earlier work of the band, but their previous full length (cf. “The Gathering Of Hopes”) was an interesting opus. Notice by the way there also is a tape entitled “The Unexpected Bonus Tape” that has been released featuring a few extra songs that haven’t been released on CD.

Content: The sources of inspiration don’t have really changed. Der Klinke remains faithful to their dark cold-wave sound carried by typical 80s mewing guitar play and cold synth parts. The dark sphere recovering the songs is an essential aspect of the work. The deep and somewhat growling vocals perfectly with the sound this Belgian band is dealing with.

+ + + : “The Unexpected” sounds in the purest tradition of gothic, cold-wave and related music genres. There’s this magic 80s spirit hanging over the songs. The guitar playing sometimes reminds me a bit of Sisters Of Mercy, but it’s especially the symbiosis between guitar and electronics which makes this work accomplished. The song “Liars” is a little jewel confirming this harmony. Two guest singers were invited to join in for a few cuts and I especially want to recommend the great twist between male and female vocals on “The River White”.

– – – : The only little minus about this album consists of the somewhat softer cuts, which can’t really convince me.

Conclusion: Der Klinke is a band that clearly progress on each new work. “The Unexpected” is without a shadow of a doubt their best work to date.

Best songs: “Faith Healer”, “The River White”, “Someone Who Smiles”, “My Frozen Heart”.