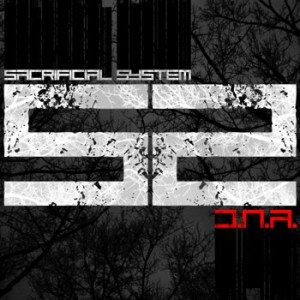 Background/Info: Sacrificial System is a one-man project set up by Keith Kosmopolis. This American artist based in Chicago has released an album featuring 7 songs.

The debut part of the work sounds promising while the last cuts are less inspired. The final cut, which is a kind of ‘outro’ reveals a delicate sound approach and a different sound than the harder beginning cuts.

+ + + : The first four songs are pretty exciting. I like this powerful merge of guitar playing and somewhat 90s-like EBM reminding me of Zoth Ommog bands. You clearly can recognize harder industrial elements in the percussion and impressive electronic treatments.

– – – : The 2nd part of the work sounds a bit like the artist has lost his influences from the beginning, which is a pity. With some extra experience and production skills this band could really catch a wider audience.

Conclusion: From this album I’ll keep an exciting industrial-EBM exposure in mind. With some extra technical- and studio help and tools (maybe a producer) Sacrificial System could be able to break through.