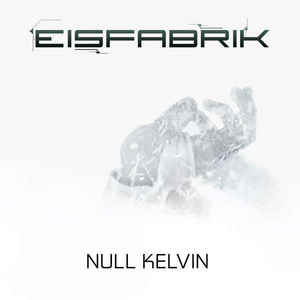 Background/Info: Eisfabrik is a funny, but great project driven by the genius of Gerrit Thomas (Funker Vogt). It’s ‘funny’ because of the concept around ice, snow… but still a band with a very own image and also live show performances. The members also have funny nicknames such as Dr. Schnee, Der Frost and Celsius. “Null Kelvin” is already the fourth album by Eisfabrik, which wants to bring us towards the ultimate point below zero degrees Celsius.

Content: Everything looks ‘cold’ and ‘icy’ when it concerns Eisfabrik, but the sound is definitely hotter and even sexy! “Null Kelvin” holds on the familiar sound formula revealed on previous albums. You can easily recognize the typical sounds and arrangements with the stamp of Gerrit Thomas on top, but now in a softer and even pop-driven approach. The vocals are pure electro-pop like and once again reminding me of Ronan Harris. So in the end “Null Kelvin” already sounds like the imaginary offspring between Funker Vogt and VNV Nation, Neurotichfish and related formations.

+ + + : Eisfabrik is something apart from the classical electro/future-pop scene and not really an EBM formation. This formation operates somewhere in between and that’s precisely what makes the attraction of the music reinforced by an original image. It’s the kind of music that might appeal for a wider audience, but first of all to music lovers who like to dance. If you consider Eisfabrik as an electro-pop formation they definitely belong to the most powerful acts in this scene. The pumping kicks, icy sequences and carrying leads reinforced by great vocals make this album hot and sexy. There are several noticeable songs featured here, but I especially want to mention the somewhat disco-pop driven “Too Many Miles”.

– – – : Eisfabrik hasn’t changed its sound formula and I think there’s no reason for that, but the initial magic is a bit gone. The songs become a bit predictable and that’s an aspect this prolific formation (4 albums in 3 years) maybe has to reconsider on future productions.

Conclusion: If you like snow and ice and you like to go on Winter sports, you better try Eisfabrik, which is an energetic sonic dance unity that will get you into a frenetic dance!