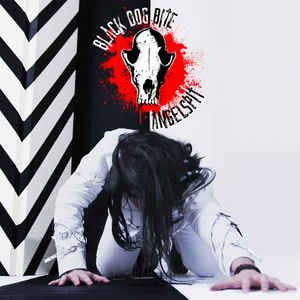 Background/Info: Australian Angelspit is now based in Los Angeles (USA). The band can look back on a prolific and successful discography, “Black God Bite” being their seventh album since “Krankhaus” (2006).

Content: Angelspit is a real sonic phenomenon. They don’t really belong to an established underground genre, but simply brings different genres together. That’s what this new opus already confirms taking off an electronic way to progressively revisit other genres such as punk, rock and industrial. “Black Dog Bite” is all these influences together with an extra sexy touch on top.

+ + + : I like the progression of the work, which features its best cuts at the final part. Angelspit is pure sonic chemistry between different genres. I especially get wild for their electro-industrial components revealing great sound manipulations and fat, blasting sounds. Some cuts reveal a cool, minimal approach (cf. “Dead Man Talking”), but the main strength of the work remain the impressive sonic manipulations running through different songs (cf. “Collapsing Venus”, “V Is For Voltage”). Angelspit is powerful and still sexy, which is a characteristic you also will find back in the production of the vocals, Zoog Von Rock remaining a charismatic frontman.

– – – : Angelspit considers this album as ‘the most highly produced album to date’ and that’s a statement, which rapidly comes through. There are no songs to throw away while the sound of the band remains a single experience in ‘electronics’. I should say that some of the beginning tracks aren’t the most convincing ones, but you don’t hear me to complain.

Conclusion: Angelspit has the look, but they also have a very personal sound, which never stops to conquer new fans. Brutal and sexy, violent and hot, “Black Dog Bite” is pure sonic dynamite!