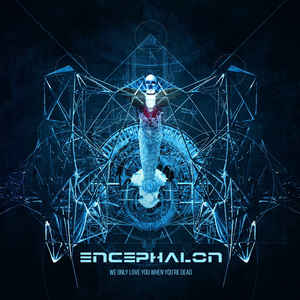 Background/Info: Canadian formation Encephalon is back on track unleashing their third official album. They already released their debut album on Artoffact (cf. “The Transhumant Condition” in 2011) and signed to Dependent Records for the second opus (cf. “Psychogenesis” in 2015). They’re now back on Artoffact to unleash new songs inspired by sci/fi and technologie. Notice by the way the album is also available with an extra disc.

Content: Encephalon is one of those bands featuring the typical Canadian electro sound. I don’t want to compare their sound to Frontline Assembly, but there definitely are common elements in the sophisticated writing and global sound intelligence. The songs are hard although sometimes moving into cinematographic passages. The work reveals orchestral and bombastic arrangements.

+ + + : Encephalon has accomplished a little masterpiece, which is carried by an efficient although complex composition. You clearly can tell that this is not the kind of production that has been accomplished in a hurry. The work is carried by high-tech production skills. I especially like the way they’re mixing EBM elements together with heavy, orchestral arrangements. The songs also reveal great bass lines, gigantic sound atmospheres and charismatic vocals. There’s a kind of evil and irresistible power emerging from this album.

– – – : Encephalon is clearly not the ‘stereotypical’ electro formation dealing with cheap EBM. It’s a somewhat difficult composition, which needs a few listening before you possibly will catch the essence of their work.

Conclusion: This is for sure my favorite Encephalon-album although not the most accessible one. This is the kind of album you each time again will notice new elements and other little details.