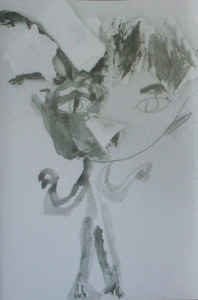 Background/Info: Edward Ka-Spel is an artist of many talents, but first of all a real veteran from the underground scene. We all know him as the enigmatic front man of The Legendary Pink Dots and The Tear Garden. Ka-Spel also released numerous productions under his own name, but this one is something special. It concerns improvised jam sessions that have been recorded during the 80s and now released on cassette format.

Content: The A-side features “The Berlin Sessions 1 & 2” from 1981 while the B-side entitled “An Amsterdam Space Jam” is from 1986. The common element between both cuts is the improvised character seeing Edward Ka-Spel experimenting and simply jamming with the material he had. It sounds pretty experimental- and abstract like while reminding the numerous experiments artists made during the early 80s.

+ + + : This is a real sonic testimony from early Ka-Spel music. It’s hard to label this records as ‘music’ properly speaking. This is nothing else than experimenting with sounds and multiple noises sources. It feels a bit like Edward Ka-Spel was going mad on the gear he had in front of him. It’s also pretty cool discovering this work on cassette format, which probably is the single format fitting to this kind of experiment and the period it has been recorded.

– – – : This work brings us back in time revealing a somewhat forgotten experimental style of this artist. It’s extreme and hardly experimental although an interesting production.

Conclusion: The cassette format of “The Perfect Patch” has been limited to 100 copies, which makes this release even more interesting! Edward Ka-Spel moves back to his early years as artist and bring us pure improvisation and abstract sounds.