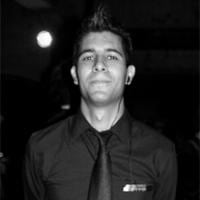 Background/Info: Mexican DJ/producer/label owner Dimitri Berzerk is an artist who has remixed an impressive number of artists. He decided to release these remixes as albums in the “Remixes Collection”-series. This is the 3rd volume featuring 12 remixes.

The most familiar names from the tracklist are Syrian, Loewenhertz, Head-Less, Electrostaub, Nordika, Hoffen and Schwarzschild. But Projekt Ich, Shadow Lady, Vantanoir, Microclocks and Rebel Empire are not exactly familiar names.

+ + + : Referring to the bands that have been remixed on this new volume I would say it’s not as interesting, but once you’ve heard the album you’ll definitely agree to say it’s a great –and maybe the best, album from the three. Dimitri Berzerk feels comfortable remixing electro-pop, future-pop and even EBM. He has this magic touch to get people dance. But he also made me curious to discover unknown bands. I can only advise artists in search of a good remix to get in touch with this artist.

– – – : My single regret – and it’s for sure very personal, is that some remixed are a bit too long. That’s why they’re called ‘extended’ and even if it’s good dance stuff, it’s sometimes more efficient to get a shorter version –even for dancefloors!

Conclusion: This is an interesting series; pure dance-fun for electro-pop lovers and club visitors!