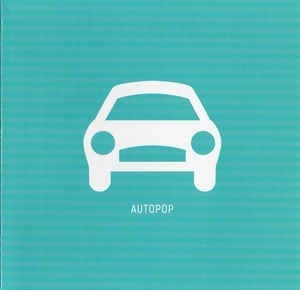 Background/Info: Deutsche Bank is not a German, but a Swedish electro-pop formation set up by Mats From. I discovered this band from the digital EP “Autopop” released on Plonk in 2013. It was a more a kind of mini-CD featuring 7 songs that has now been released on CD format for the very first time while the “Deluxe Edition” refers to the extra remixes of the original songs.

But Deutsche Bank also reminds me of Metroland. There’s a similar kind of crazy, but great concept, which deals with ‘cars’ and that’s an element you can find back in several titles and the album title of course.

Right after the 7 original songs you get exactly the same order of songs, but remixed now. It’s not of a coincidence if Metroland is one of the remixes and also the most famous one. The other remixes have been done by rather unfamiliar (Swedish) bands like Frohm, Maschine Brennt, Mononot, Sector One, Cha Cha D and Kretz. I have to say that most of the remixes add a real bonus to the original versions.

+ + + : Deutsche Bank is for sure, together with Metroland, the hottest Kraftwerk-emulator in the past few years. The songs have been accomplished by cool sound treatments and alluring melody lines while the robotic effect on top of the vocals have this astral magic touch. Songs like “Cities”, “Cüber Mensch” and “[don’t stop] Autopop” all are well-crafted and efficient electro-pop tracks.

The remixes are fully enjoyable, each band trying to add something personal to the original song. It’s hard to give a favorite, but the Sector One-remix definitely is one of the most noticeable ones.

– – – : The single negative point I can imagine of course is the lack of originality, but after a few minutes you simply forget Kraftwerk and simply enjoy the ride together with Deutsche Bank.

Conclusion: If you already like Metroland, you for sure will enjoy Deutsche Bank. This band shares the same spirit and the same passion for electro-pop music.