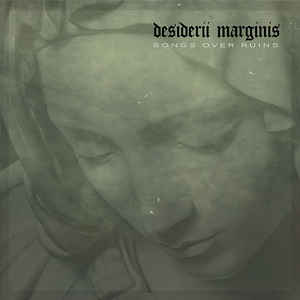 Background/Info: Desiderii Marginis became without a shadow of a doubt the most successful formation of Johan Levin. The Swedish artist got involved in The Wounded Meadow and Lost In The Woods, but in 1997 when he unleashed his debut album “Songs Over Ruins” on Cold Meat Industry, he got an instant recognition for his music. This album has been now re-released on Cyclic Law. Johan Levin remastered the tracks. Next to the CD format the album is also available as a strictly limited vinyl (in 2 editions).

Content: I perfectly remember this album, which was just one more addition to the great roster of Cold Meat Industry. Desiderii Marginis composed an overwhelming dark-ambient music with some ritual elements on top. Some mystic chants passages might remind you of Raison D’Être, but globally speaking this project was moiré diversified although a pure dark-ambient formation.

Crashing sounds, multiple little noises, pure ghost-like atmospheres and ritual like bells will lead you into a dreamy universe and then into pure horror.

+ + + : “Songs Over Ruins” remains my favorite work of Desederii Marginis. It was a diversified work featuring all requested ingredients to accomplish a dark-ambient masterpiece. The atmospheres move from reverie towards haunting passages. This work was totally accomplished and remains a reference in its music genre 20 years after its original release. I enjoyed the somewhat ritual flavor hanging over the tracks, which only accentuates the mystery emerging from this work.

– – – : “Songs Over Ruins” is an album, which remains close to perfection so I can’t really think of any single minus point. It’s maybe less darker than some dark-ambient masters, but that’s not really a point.

Conclusion: Time goes by, but masterpieces remain! “Songs Over ruins” brings us back to the essence of dark-ambient music and a heroic period of the great Cold Meat Industry ‘family’.