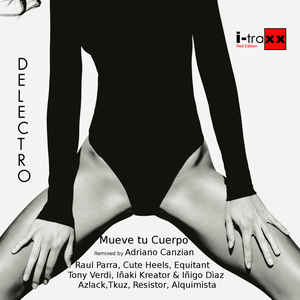 Background/Info: Colombian DJ and producer Diego Diaz claims to be inspired by 80s electronics, EBM bass lines and techno music. He already released a few EP’s and now strikes back with this EP featuring 13 remixes and alternate versions of the title song.

Content: “Mueve Tu Cuerpo” is driven by a solid EBM sequence, some sexy female groaning plus a few male spoken words. The song makes me think of Liaisons Dangereuses ‘on speed’.

Remixes have been accomplished by an impressive list of artists. Adriano Canzian, Cute Heels, Equitant, Tony Verdi, Azlack, Tkuz, Inaki Kreator & Iñigo Díaz, Resistor, Alquimista and Raul Parra (remixing 2 songs) have been asked to accomplish the remixes. They all add a very personal touch, which however remains strongly carried by the techno-body style of the original edit. The last song is a “Radio Edit” of “Mueve Tu Cuerpo”.

+ + + : “Mueve Tu Cuerpo” is the perfect title song for an EP. It’s an efficient piece of pure techno-body stuff, which will ravish the truest body fans and dark-techno freaks. I especially like the link with the 80s electro-wave & EBM reminding me of Liaisons Dangereuses.

Among the remixes I noticed great contributions by Equitant and Tony Verdi, and also cool remixes by Andriano Canzian, Raul Parra and Azlack. The mix of techno and EBM remains pretty minimal, danceable and vintage-like.

– – – : The only point of discussion is the endless number of remixes. Even if they’re pretty diversified, they more seem to be stuff for DJ’s who this way can choose their favorite version/remix.

Conclusion: “Mueve Tu Cuerpo” definitely sounds like sonic food for the dancefloors. This is the sound of modern techno-body music made in Colombia: hot and danceable!