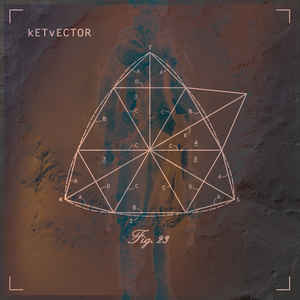 Background/Info: “Fig. 23” is the return after a long hibernation of kETvECTOR. Set up and driven by Justin Bennett (Skinny Puppy, Askew, Bahntier ao) and Stefano Rossello (Bahntier, Detune-X), it took nine years for this duo to achieve a new album. It clearly appears to be a ‘tour de force’ as they invited an impressive list of guests and -singers like Edward Ka-Spel, Nivek Ogre, Buzz McCoy ao.

Content: “Fig. 23” sounds definitely experimental and into soundtrack experiments. The songs are pretty diversified although carried by a solid cinematographic basis. Some passages are pretty evasive while other cuts are into bombast carried by sensual rhythms. It now sounds very electronic and then more into psychedelic experiments.

There’s a similar diversity in the vocals, which have been sung by different singers. From the half spoken style of Edward Ka-Spel to the sensuality of Suz you directly notice a different approach.

+ + + : “Fig. 23” is an unusual release and that’s an aspect always have liked and supported when listening to music. You clearly feel a kind of reflection behind the composition and the choice of the guest musicians/singers. That makes this work pretty unique and definitely experimental… even a bit avant-garde. It’s the kind of work that needs a few listenings before you really can seize a part of it. The selection of the guests definitely is a real good reason to pay attention to this work.

– – – : I can’t say that there’s a real strong coherence between all tracks. It sounds a bit fragmented, like a sonic puzzle. There’s no real climax running through this work, which more appears to be a part of a wider artistic concept.

Conclusion: The main characteristic of what we commonly call ‘visionary’ and/or ‘avant-garde’ music is that it always takes time before people might realize the real strength and beauty of the work. I’m not that convinced for the moment, but the least I can say is that kETvECTOR has released a very personal work.