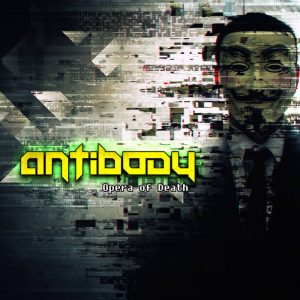 Background/Info: Jan Laustroer has now been active for a couple of years under the Antibody moniker. This German artist self-released the debut EP “Schrimps” (2015) and made some noticeable remixes, plus got featured on the famous “Endzeit Bunkertracks”-series (Alfa Matrix). “Opera Of Death” is the debut album of Antibody and features 13 songs plus 6 remixes.

Content: The techno-body style rapidly emerges at the surface of the work. It sometimes sounds a bit like the offspring between Seb Komor and Noisuf-X. You feel there’s a similar taste for hard-kicking kicks and bass drums joined by a few sampled words. One of the songs features SynthAttack resulting in hard, distorted, but cool vocal parts.

The remixes have been done by Binary Division, Forgotten Sunrise, Studio-X, Detuned Destruction, The Gothsicles and Cold Therapy.

+ + + : The sound approach of Antibody is not that new, but clearly dealing with a modern techno-industrial approach, which might remind you of Noisuf-X for the global sound formula and Seb Komor for the sound treatments and manipulations. “Opera Of Death” is music to make you dance and reveals an interesting potential. The song together with SynthAttack sounds more accomplished –maybe because of the vocals, but I also have to mention the title song, which will appeal to the fans of Noisuf-X.

I noticed a few cool remixes and especially want to mention the great job by Studio-X and The Gothsicles.

– – – : I sometimes miss a little bit more elaboration in the global songwriting while a few more spoken samplings and/or real vocals would for sure add something extra. From a pure technical point of view the global production of the album has to be seriously improved in sound and mixing. Put this work in the hands of Seb Komor and I’m sure you really will get a sonic bomb!

Conclusion: Antibody confirms to be a project with an interesting potential, but it still sounds like a ‘young’ project that has to grown and getting more experience to ‘kick a***’ the way Noisuf-X and Seb Komor are doing! This is however a band to keep an eye on!

Best songs: “Into The Night feat. SynthAttack”, “Opera Of Death”, “Nothing To Fear – Studio-X Remix”.

Since you’re here … … we have a small favour to ask. More people are reading Side-Line Magazine than ever but advertising revenues across the media are falling fast. And unlike many news organisations, we haven’t put up a paywall – we want to keep our journalism as open as we can. So you can see why we need to ask for your help. Side-Line’s independent journalism takes a lot of time, money and hard work to produce. But we do it because we want to push the artists we like and who are equally fighting to survive. If everyone who reads our reporting, who likes it, helps fund it, our future would be much more secure. For as little as 5 US$, you can support Side-Line Magazine – and it only takes a minute. Thank you. The donations are safely powered by Paypal.
Tags: Antibody, Noisuf-X, Studio-X, SynthAttack