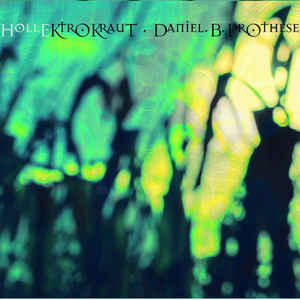 Background/Info: Daniel Bressanutti (Daniel B) became a real prolific artist during the past few years. He released an impressive number of productions as Nothing But Noise (with his old compares Dirk Berghen) and also under his own name (associated with his early project Prothese).

Content: The title of this double album also reveals the inspiration and/or sound approach featured on “HöllEKtroKraut​ / HellEctroKraut”. It rather sounds as a very personal interpretation of the German ‘krautrock’ by Daniel B. He revisited this music style with his typical and very personal sound. Each disc features 5 songs on, which you’ll rapidly recognize some of the artist’s trademarks. He reveals a great sound arsenal, which mixes experimentalism with industrial sound treatments, astral spheres (reminding to Nothing But Noise) to certain early Kraftwerk-touch.

+ + + : Daniel B will always be linked to Front 242, which is quite normal as he always has been the great instigator and sound architect behind the legendary EBM formation. But his solo-work especially reveals the passion he has for sound creation and noise. He has this magic touch to create something ambient –or krautrock-like by mixing noises together. The experiment slowly becomes more accessible revealing a cinematographic appeal. The tracks have been composed with a slow progression, sometimes supported with noticeable strings. I like the dark- and raw approach, which is part of this artist.

– – – : I would make the same comment as on some Nothing But Noise cuts; a few tracks and passages are a little bit too long creating monotonous passages. Daniel.B.Prothese remains an extreme experiment, which has nothing to do with Front 242 although you’ll recognize the sound DNA of the master…

Conclusion: Daniel B clearly still has a lot of ideas and music to share with his fans. He brings krautrock alive or simply revisited the genre his very own way.