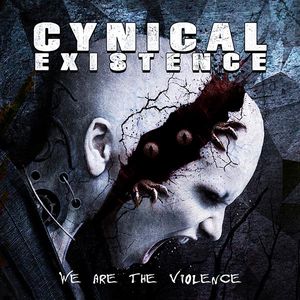 Content: Fredrik Croona –also known from Menschdefekt, is back on track with his 3rd full length Cynical Existence album. It all started as a solo-project, but the new album now features two more members. It’s rather surprising to see George Klontzas (Pre.Emptive Strike 0.1) and guitarist Filip Lönnnqvist (Rave The Reqviem) joining in.

The typical over-saturated and enraged vocals of Fredrik Croona remain once more the main characteristic of this work. Croona is screaming like a possessed soul and even if I’m not always convinced by his exaggerated way of singing, it’s an essential part of this band.

Musically it quickly becomes clear that a few things have evolved. The guitar parts inject a furious touch to the dark-electronic basis. Vocals and guitar together sound like they are creating an evil pact, which is somewhat refined by the melodic approach of the electronic passages. I can imagine that the impact of George Klontzas has been important when it concerns this melodic aspect of the production. It all creates a kind of duality. You on one side get a real wild and somewhat anarchistic element, and on the other side a more melodic input. But in the end it all works fine.

I however have to admit that it took me a few cuts to really get into the fury of this work. The 4th song “The Kill” is a very efficient song where I especially enjoyed the empowered chorus parts on which Lönnqvist is playing the guitar with brilliance. The synth-lines running through this song are worthy as well. “We Are The Violence” is a kind of prophetic title for its global sound. There’s a constant twist between rage and melody. Some parts of the vocal production have been accomplished by a nice twist between the familiar enraged and merciless format and other cleaner parts. It creates a kind of ‘duo’, which works perfect on songs like “You” and “We Are Through.” The last mentioned song is a fabulous finale, which is more into a kind of tough dance-electro style touched by an irresistible and somewhat trance-minded lead. But there also is a duo featuring Wojek Krol (Controlled Collapse) on “Stains That Never Fade”, which is a noticeable song as well.

The leads add a real bonus to the album although it sometimes appears to be a bit ‘cheap’ as well. I’m referring to some kind of simplicity at “Sweet Dreams” and the very into dance/trance sounding melody recovering “Sovereign”.

The extra disc features 14 extra songs, which mainly consist of remixes by familiar bands mainly active at the dark-electro scene. One of the main attention grabbers however is the new song “Call Of The Beast”, which I think, would have deserved to be on the main disc. It sounds cold and the tune running through this cut makes me think of Suicide Commando.

Among the remixers you’ll find bands like Acylum, ES23, Aktivehate, Reactor7x, Larva, Cutoff_Sky ao. The final remix was accomplished by Pre.empstive Strike 0.1 –which is a rather logical choice, but my favorite is the clubby remix of “The Heartless” by DJ Shades FIN.

Conclusion: I still do believe that some of the vocals are too heavy and enraged, which somewhat undermines the impact of the music, but globally speaking this new work is the most accomplished and elaborated one.

Best songs: “We Are Through”, “The Kill”, “Afflication Of Self Torture”, “Stains That Never Fade” + “The Heartless – DJ Fades FIN Remix”.