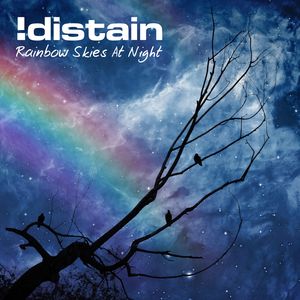 Content: It took more or less 4 years for Distain to unleash their newest album featuring 11 songs. Distain is an old-time established synth-pop combo, which released their debut-CD “Cement Garden” now 20 years ago. They directly revealed great writing skills and progressively became one of the leading flag holders for German synth-pop.

The new work doesn’t reveal any great surprises. Distain is a well-oiled pop machine for whom the formula of how to make great synth-pop music is no longer a secret. This 7th full length album confirms their great writing skills and experienced production work. The songs are carried by solid bass lines while constantly embraced by warm and elaborated strings. The unavoidable melancholic moods are hanging over the work, which is a good-old synth-pop ingredient. The songs are rather quiet although some harder kicks can be noticed as well. Last, but not least, singer Manfred Thomaser remains a real talent for this kind of music.

The album was introduced by 2 noticeable singles (cf. “Where In This World” and “A Million Engines”), which remain some of the biggest attention grabbers. Both songs are more danceable while the elevating choruses will for sure lead Distain’s fan bases to ecstasy. I also have to mention “Gunfires”, which is an interesting cut for the contribution of DJ Ram. Lyrically, this song reveals a rather simplistic content, but in the end the song rocks.

A few more guests contributed to the work. Elektrostaub contributed to the already familiar “Where In This World,” and you also will hear some guitar parts in “Back To History” injecting a new-wave touch on top. DJ Ram also contributed to the mix and production of several songs. Distain didn’t spare any effort to reach again a high level of qualitative synth-pop and from a pure technical point of view this album is absolutely remarkable. The only regret is that while you can expect to hear a few cool songs, this album doesn’t feature a new absolute and indisputable hit.

Conclusion: Great synth-pop music by a talented and renowned band, but without real surprises.