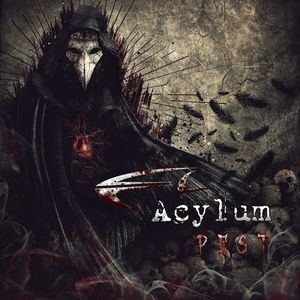 Content: This is the first Acylum album in four years. Mastermind Pedro Engel mainly focused on different (new) side-projects like Totem Obscura and Aengeldust. Acylum strikes back with a new opus revealing 14 songs without any compromise.

Acylum probably became one of the most commented and controversial bands of the scene. The previously released EP “Zigeunerjunge” only fed the controversy, but belief me, “Pest” will not leave you unaffected. It deals with the plague (cf. “Pest”), which has been symbolized by the great artwork at the front cover revealing a figure wearing the plague mask. But the plague by Acylum concerns current socio-political items. Acylum pushes the boundaries of ‘politically incorrect’ to the extreme, but the listener has to make up his mind. Titles like “Zigeunerjunge”, “Breivik”, “Vaterland” and “Born To Be Hated” all are inspired by politics, racism and nationalism. Just pay attention to the samplings and you clearly will understand why Acylum deserves an award for most provocative band active on the scene. But at the other hand, it also is -deliberately or not, a great way to get into the spotlights and the ‘artistic freedom’ of any artist…

Musically, this new album sounds like a real masterpiece. Acylum’s sound and provocation definitely reminds me of :Wumpscut:. It also is a risky business to compare bands with each other, but I might say that Acylum went on there where :W: became softer and more intimate during the few past years. “Pest” is a hard and extremely dark electro composition. It’s an album that progressively contaminates and torments you. This is the effect of “Pest” symbolized by pure terror electronics. Another possible source of inspiration might be Heimataerde for some very melodic, but somewhat medieval melody lines. “Vaterland” is one of the most efficient tracks in the genre, but also I have to mention “Breivik.”

Next to the somewhat medieval and even evasive arrangements you’ll discover an extreme haunting atmosphere empowered by electro-industrial rhythms. Acylum is a dangerous weapon some sick minds better not discover, but it also is a f****** genius project.
Pedro Engel also takes care of the enraged vocals while his wife Nadine Engel has been featured on a few cuts as well. She has a very explicit and somewhat witch-like timbre of voice, which on songs like “Our Last Breath” and “Them Plague” will give you goosebumps.

A few more great songs are “Pest”, and “The Rhythms Of Violence” which is carried by a pure Suicide Commando-like tune. Wynardtage was featured on, “The Rhythm Of Violence”, which is a nice surprise as both bands have not always been on good terms with each other.

The shadow of :W: hangs over this album, but the little bonus making Acylum different from other ‘clones’ is the harder approach and some personal elements like the epic –minded chants in, “Dear God.”

The limited edition features an extra disc of 15 remixes. This is an opportunity to discover some other great names of the dark-electro scene remixing the master of provocation! I want to mention the great creative efforts of bands like Amduscia, Panic Lift and Nano Infect. One of the most atypical bands of the list also accomplished the most refreshing and original remix. I’m speaking about Avarice In Audio, which is one of the ‘hot’ Alfa Matrix new comers. They did a great job remixing “Pest.”

Conclusion: “Pest” is an extreme provocation, and brilliant piece of work! I even dare to say that it’s one of the main dark-electro releases of the past 10 years!

Rabbit Junk returns with all new album, ‘Apocalypse for Beginners’

The Awakening returns to gothic metal roots – watch the video for ‘Passage (Part I – IV)’ from the new double album, ‘The Passage Remains’