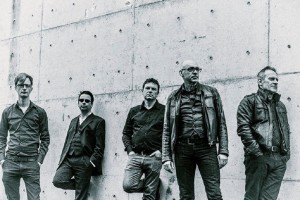 Honeymoon Cowboys consist of Siglo XX members Antonio Palermo (on guitar) and Klaas Hoogerwaard (on drums). They’ve been joined by Kris Dries (on bass guitar and brother of Siglo XX singer Erik Dries), Thomas François (on keyboards) and Tom Van Troyen (vocals and ex-singer of Spiral Of Silence). The link with Siglo XX is very clear and even accentuated by numerous Siglo XX-songs that have been transposed into dark-rock, new-wave and ballad-rock style of this promising formation. The album “Liberating The West/Still” has been released on Starman Records & Tracks And Traces. I’d a chat with Antonio Palermo.

Q: I’m fascinated by your band name! Siglo XX sounded pretty cold and 80s-like, but Honeymoon Cowboys sounds into pure rock’n’roll! What is it all about and did you need to drink much beers to find the name?

Antonio: Lol, no we did not need much beer to find a name. It came spontaneously. I remember that we were in a studio, I think 15 or 16 years ago now, and we were recording some things for fun. The technician asked which name shall we write down and I said Honeymoon Cowboys, so the name was born. After all those years the line-up changed, only Kris, bassist was from the start a member.

I cannot give a proper answer for the first part of the question because I think nor the label for Siglo XX fits nor for Honeymoon Cowboys. The only thing I can say, is that Siglo XX was a bunch of friends, and we still are, and accidently we started to make music without any notion of music. Honeymoon Cowboys are different people who just make music and in the meantime became friends, despite the age differences.

Q: What has been the trigger to get back into music (in a way to reform Siglo XX) and what have been the main ideas when setting up Honeymoon Cowboys?

Antonio: As I have said in the previous answer, I never stopped making music. Most of the time it was for just fun. And it was surely not the idea to reform Siglo XX. Even if I would, I could not. Siglo XX will always remain what it was. The main idea was that I had some ideas and that I wanted to record some things and the only thing that we missed at that time was a drummer, so I called Klaas and the problem was solved.

Q: But the shadow of Siglo XX is hanging over this new band, like it was hard to cut off the umbilical cord. Is it melancholia or what is it all about?

Antonio: It is surely not melancholia. Maybe the people want to hear and to see what is not there anymore. But for me the two are completely different. And the past, the melancholia creates maybe the shadow.

Q: Tell us a bit more about the way you reworked the old Siglo XX songs and how was it composing the new tracks?

Antonio: The Siglo XX songs sound live pretty much how we used to play the songs live. There was no much reworking. The only difference is that we add just a guitar and synth, organ and/or piano. And that Dirk (Siglo XX bassist) plays the bass.

The four important elements to compose a track are: a melody, instrumentation, experiment and coincidence. And the rest is being patient.

Q: The title of your album “Liberating The West” is quite intriguing so what’s the deeper meaning behind and is there a possible link with the artwork?

Antonio: The title of the album is “Still” and you can combine it with the logo “Liberating The West”. Politically it means that there is not so much changed, things are getting from worse till worst. In this sense the spirit of Siglo XX is still there. And the link with the artwork, which was made by Erik (vocalist of Siglo XX), can be still revolting for a better world. And beside that it sounded very nice.

And the link maybe with Siglo XX is that all the members of Siglo XX co-operate at this album.

Q: Singer Tom Van Troyen (Spiral Of Silence) definitely appears to be a real important element of Honeymoon Cowboys. How did you guys met and tell us a bit more about the impressive production of the vocal parts?

Antonio: I met Tom 17 years ago. Spiral Of Silence asked me to produce a CD and play some guitar on a song. I played several times with them live. From then on we kept in touch. So I didn’t really need to search for a vocalist, I just phoned him and that was it.

There was no impressive production. Tom has by himself an impressive voice. The only thing we had to do, is seeing what voice color suited the best for the song and that was trying, trying and trying and being patient. But that was also for the rest.

Q: You already played several live shows so what have been the reactions so far and what kind of live band is Honeymoon Cowboys?

Antonio: The live reviews are very positive, so we can’t complain. The second part is very difficult to answer because we can’t say how the people look at us. They are free to fill it in for themselves.

Since you’re here … … we have a small favour to ask. More people are reading Side-Line Magazine than ever but advertising revenues across the media are falling fast. And unlike many news organisations, we haven’t put up a paywall – we want to keep our journalism as open as we can. So you can see why we need to ask for your help. Side-Line’s independent journalism takes a lot of time, money and hard work to produce. But we do it because we want to push the artists we like and who are equally fighting to survive. If everyone who reads our reporting, who likes it, helps fund it, our future would be much more secure. For as little as 5 US$, you can support Side-Line Magazine – and it only takes a minute. Thank you. The donations are safely powered by Paypal.
Tags: Honeymoon Cowboys