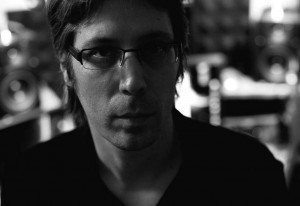 Stefan Poiss got some recognition as the mastermind of Mind.In.A.Box. although his side-project THYX is gaining more and more recognition. THYX originally was a song written by Stefan Poiss about 15 years ago. THYX became an established name at the wider fields of electro-pop music. The new album “Headless” is the fourth opus revealing a new exploration of pop fields mixed with bombastic drum sections and psychedelic atmospheres. “Headless” probably is the most accomplished and sophisticated THYX-opus to date.

Q: “Headless” is the fourth THYX-album so far. How would you introduce and define the new full length?

Q: Tell us a bit more about the way you manipulate and create your sounds?

Stefan: In the end it’s just turning some knobs till it sounds right to my ears. For sure it’s a lot of work. This is also the first album mixed on new speakers and everything seems a bit easier on them.

Q: I’ve been often intrigued by the ‘psychedelic’ atmospheres running through your work. Can you reveal some sources of inspiration and the kind of sound you’ve in mind when working on THYX?

Stefan: I think we all have our special type of sound and what you describe is the sound that is me and what is in my DNA. Inspiration can be anything, a rhythm what you detect suddenly in a noise or if you see something and imagine a soundtrack to it.

Q: THYX will be always linked to your other band (cf. Mind.In.A.Box). What are the main differences for you working on THYX and M.I.A.B.?

Stefan: THYX has no real rules. I will do whatever I want with that project. Mind.In.A.Box is related to the cyberpunk background story. I would say this is the main difference.

Stefan: I try to enjoy life more than in the past. I have this need to do and create always something and I’m fighting against it and try to be lazy.