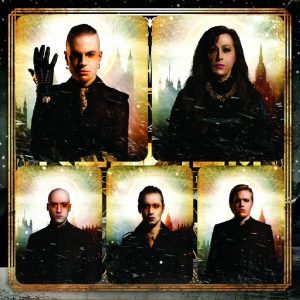 Rave The Reqviem has been set up by The Prophet (real name Filip Lönnqvist) in 2011. He got joined by his mother Carola aka The Holy Mother and a few other members. The band deals with a mix of hard metal influences and dark-electronics. They recently released their new opus “The Gospel Of Nil” on Digital World Audio. This second album is a furious and artistic production, which for sure will find new disciples getting faithful to the ‘Church of Rave The Reqviem’.

Q: I think that the initial purpose of Rave The Reqviem was to mix different music genres with each other so what does it say about potential sources of inspiration?

The Prophet: As a result of growing up in the ’90s, eurodance and American nu-metal will always have a special place in my heart. My teenage years were spent listening to various forms of gothic and extreme metal, as well as classical music. It was not until later I discovered industrial music.

Rave The Reqviem is pretty much a bizarre hybrid of these elements. It’s a pure reflection of my soul, as well as my taste in music. I’ve never been able to understand how people can be selective about music. To me, genres are just different ways of describing the same basic human emotions. But then again, I was the only kid in school who listened to both Napalm Death and Aqua, so maybe I’m just mentally disturbed?

Q: Rave The Reqviem became a real ‘band’, but what does it mean to you and what’s the input of each member?

The Prophet: The ‘band’ you’re referring to is my church. The Chvrch Of RTR. They are the clergy. All music and lyrics are still composed and produced by me, but each and every member is equally passionate and devoted to the cause. Even if I’m the primary creator and artistic director, we all stand as one. For example, The Archbishop is a professional video producer and editor. Our excellent music video productions would never have happened if it wasn’t for him.

Q: It’s really unique to get an underground band featuring a mother and her son while most parents don’t often share the same music taste of their kids. What makes this complicity?

The Prophet: My mother introduced me to the magical world of music before I was even born. She has always had a rebellious mind and a thirst for freedom, which she passed down to me. That way, she’s often been a ‘friend’ rather than a traditional mother. We have been singing and performing together for as long as I can remember. That’s why it felt natural to invite her to Rave The Reqviem. It was not until later I realized that a lot of people were provoked by it.

Q: You recently released your second full length “The Gospel Of Nil”. Tell us a bit more about the new work and were there some elements from the debut album you tried to improve/change?

The Prophet: “The Gospel Of Nil” is a concept album about the artist’s endless and destructive struggle for success and revenge. It puts slightly more focus on the ‘metal side’ of my music. It’s a dark and melancholic album, which came as a result of the tough times I was going through at that time. Since the establishment of The Chvrch Of RTR – my clergy and ‘live crew’ – it also felt natural to approach a sound which was closer to our live performances.

Q: Do you have some favorite lyrical themes and what’s hidden behind the band name, nicknames and some titles of songs referring to religious/sacred subjects?

The Prophet: My favorite source of inspiration is – as always – the Bible. It’s a bizarre, relentless and brutal book, full of inspiration for any tortured mind. I also like ancient Greek- and Roman mythology, which is equally disturbing. Every sacred text is  – deep down – a poetic and dramatic guide book on how to survive emotionally in this cruel world. They’re all based on human suffering, in one way or another. Just like my lyrics.

That’s also the thought behind The Chvrch Of RTR and all individual titles. Music is my church. This is my religion. My purgatory – my cleansing of the soul – where I spit out the poison. My way of bringing an equal amount of hope and despair to the audience.

Q: Tell us a bit more about the live performances?

The Prophet: Our live mass is exactly what you would expect it to be. An energetic, fanatical and mind-blowing experience. Ecstacy for our Believers!