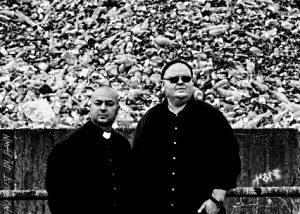 No Trust In dawn has been set up in 2016 by the German duo ‘Soykut Gür’ (Down To Reality) and ‘Rio Black’ (Atomic Neon). They one year later released their official debut album entitled “As We Fall” on Alice In…/Dark Dimensions. From the very first tones and vocals you get the impression awakening somewhere during the 80s while listening to The Cure. No Trust In Dawn doesn’t strive for innovation, but simply compose the music they like. The result is a fully enjoyable work. Singer ‘Rio Black’ give me a bit more details about this promising debut.

Q: I got the feeling that No Trust In Dawn was set up by two friends who were listening to their favorite band, which must be The Cure! How did it really happened?

Rio Black: Not Really! We met for the first time during the last year! ….and yes, we are both big Cure-fans, but not only. There are many other bands we like from that time and, which have influenced us! But now we are friends and we make the kind of music we like! (laugh)

Q: You both have been previously involved with other bands so how much of these past experiences can be heard on “As We Fall” and tell us a bit more about this debut album?

Rio Black: I’m still the vocalist of the bands Atomic Neon and Rio Black & Band. I of course got some experience being involved with other bands, but No Trust In Dawn is different!

The advantage in this band is that we are only two members so we only have to do what we love and what we want. We don’t have to discuss different elements of the production with other musicians, which simplifies everything!

The album “As We Fall” manifests our innermost; the music comes directly from Soykut’s soul and my lyrics just fit perfectly. I sing about love, sadness, magic and failure and all kind of things we feel concerned in life. The entire album is a reflection of what we feel about living in the 21st Century!

Q: And what is the title-song all about?

Rio Black: “As We Fall” is a song about failure; the feeling you get when you don’t want to fight anymore. It’s about giving up and being exhausted!

But there also is a positive impetus to more look around… ‘don’t let the people around you run in the open knife’… some people are just too weak to ‘save’ themselves! We must not fall!

Q: Your sound clearly sounds inspired by good-old 80s and new-wave music. What makes 80s that special and still very inspiring, even for ‘young’ musicians?

Rio Black: We both loved the music our siblings were listening to and often sat in front of the turntables of sister and brother and enjoyed the songs of New Order, Talking Heads or even The Cure!

I think the great thing about 80s music is the mix of new electronic sounds, the beautiful melancholic wave, the colorful punk, the dark post-punk and the unbelievable musical freedom, that still affects the young people today!

Q: You got directly signed to one of the leading labels of the scene so how did it feel becoming part of Dark Dimensions/Alice In… and what are your expectations?

Rio Black: I know Francesco from Dark Dimensions for quite a long time now. We got in touch because he likes Atomic Neon as well. I send him the demos of No Trust In Dawn, just to get his opinion, but he liked it that much we got an offer to get signed. The day we signed the contract was a real cool moment and a great honor to release our debut work directly on Alice In…/Dark Dimensions!

We expect a great cooperation and the best support as possible. But we are sure that we will not be disappointed!

Q: What can you say about the video clip you realized and what’s the importance for bands going on releasing clips?

Rio Black: Videos are not so important as they used to be these days, but they are part of us!

We had some good ideas and a great film team from Rookie Entertainment to do the whole thing. We’re into videos and have already a few more in the pipeline. The next clip will be the song “Come Closer” and next we plan a clip of “Dystopia”.

Since you’re here … … we have a small favour to ask. More people are reading Side-Line Magazine than ever but advertising revenues across the media are falling fast. And unlike many news organisations, we haven’t put up a paywall – we want to keep our journalism as open as we can. So you can see why we need to ask for your help. Side-Line’s independent journalism takes a lot of time, money and hard work to produce. But we do it because we want to push the artists we like and who are equally fighting to survive. If everyone who reads our reporting, who likes it, helps fund it, our future would be much more secure. For as little as 5 US$, you can support Side-Line Magazine – and it only takes a minute. Thank you. The donations are safely powered by Paypal.
Tags: No Trust In Dawn, post-punk