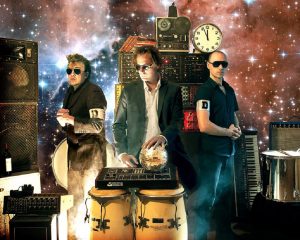 No doubt about it, I’d a crush on Frozen Nation’s debut album “Dark Belgian Disco”. This band featuring Belgian and French members deals with a mix of electro-pop, Italo-disco and electroclash. The music is a happy-like danceable format mixed with some funny lyrics, but it also reveals great electronic treatments and professional production skills. This album has been one of the most refreshing productions from the past year and a band I can only, but recommend for their atypical music approach. I’d a chat with D&D – Moss + Elvis (the modular synth)…

Q: Let’s traditionally start by asking you who’s hiding behind Frozen Nation, how did you get in touch with each other and can you give us some brief background information about the members music background?

Frozen Nation: Frozen Nation consists of D&D, Moss and Elvis. They met at ‘Spector Studio’ in Brussels, jamming with Elvis (Elvis is a unique modular synthesizer built during the 70s by an unknown engineer for Jethro Tull) and making the basic tracks for what would become “I Failed For You”, the band’s 1st single.

Moss is the dark guy, the die-hard goth, the guy who can burst into tears when he watches a black and white music video of a completely unknown underground darkwave band. Though he was a Bon Jovi fan when he was a teenager (and he still is a bit).

D&D worked in Paris as producers for many projects as well as advertisement or fashion shows scores, then they moved to Brussels and still produce many records like for instance “The Cultural Studies” whose single “The Automaton” was considered best 2016 track by Tom Robinson on BBC 6. They play many instruments, work as recording and mixing engineers and build their own gear (microphones, synthesizer modules, compressors, preamps, summing mixers, etc.), they brought back Elvis to life when they bought it from a stupid guy in France.

Q: Your debut album entitled “Dark Belgian Disco” is a rather intriguing title although an indication about the content. But I would like to ask you for the description of the content and possible influences?

Frozen Nation: “Dark Belgian Disco” sums up the contradictions and the fight between D&D and Moss’ musical tastes. D&D are huge fans of the 1974-1979 disco era productions, KC, Chic, The Bee Gees, Giorgio Moroder, etc. And Moss is more into dark-wave, goth and obscure music. However, we all share a common taste for post-punk and cold-wave stuff, or bands like Roxy Music (1st period with Eno), New Order or John Foxx. And it’s all made in Belgium!

Q: That’s maybe why I experienced “Dark Belgian Disco” as a sonic bridge between good-old disco effects and more contemporary electro-clash and –pop influences. What is it all about and tell us a bit more about the main purposes and production of this opus?

Frozen Nation: That’s an interesting reflection. D&D wanted indeed to bring this touch because they love contemporary pop, and this touch is always darkened by Moss’ way of singing. The first mixes were more rough and violent, but before sending the tracks to the mastering we made new mixes for almost all the songs to get something more gentle and emotional and we also had a deep talk with Bruno Gruel at Elektra Mastering to keep and enhance this smoothness.

But we definitely are influenced by this electro-clash/pop stuff, and only few people notice it as we are usually classified into synth-pop or dark-wave. For instance we recently covered live “My Life Muzik” by Felix Da Housecat and many people thought it was a new Frozen Nation’s song, they told us ‘man, we loved your new track you played at the end of the show!’ hahaha.

Q: Frozen Nation clearly sounds atypical, but I guess that’s precisely what you try to be: ‘different’ from the average and classical electro-pop formations. What do you think about contemporary electro-pop music?

D&D : We are very keen on contemporary electro-pop music, we are impressed by the work of Serban Ghenea as a mixing engineer, he manages to get a dirty and emotional sound that reaches a mainstream audience, we listened a lot to songs like “Jungle’s Busy Earnin”, “The Weeknd’s Can’t Fell My Face” or “Can’t stop The Feeling” during the making of the album. Moss thinks it’s all shit but for us it’s a kind of consensual point of view. We also love the character of nu-disco acts like Midnight Magic and we were quite impressed by the vocal performance on Melanie Di Biasio’s last album.

Q: What have been the first reactions about the album plus live shows and do you think there’s a specific scene for Frozen Nation?

Frozen Nation: We had very positive feedbacks from many medias and lots of radio airplays especially in Belgium and France, but also on dark-wave programs all over the word. We must say we are mostly supported by the dark and goth communities and we like to provoke them a bit by covering disco and dance songs, however we went too far by playing Haddaway’s “What is Love” and we’re thinking of removing it from our set list… Live shows are a lot of fun and people are always dancing.

Q: Image is an important item for most of the bands today while here again Frozen Nation looks different, maybe a little less into kitsch and reflecting a vision of ‘happiness’. Any point of view about this item?

Frozen Nation: You think we’re not kitsch? We actually really tried to be kitsch, anyway, it doesn’t matter. We are 2 disco electro-pop lovers and a dark guy making music together, it’s all about contradictions, sometimes the pop lovers have a more underground rock ‘n’ roll way of life and the underground music lovers often have comfortable lives, things usually are not the way we think because the unsatisfied nature of human beings makes them talk about things they don’t possess, as we say in the title song: ‘Anyway my friend, I’m happy when I’m sad, yes this is Dark Belgian Disco’.