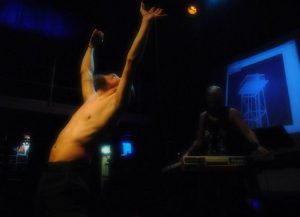 Swedish artist Fredrik Djurfeldt often reminds me to Henrik Nordvargr Björkk. He’s one of those few artists who feels comfortable composing now EBM and then dark-ambient stuff. One of his most renowned bands remains the body-music inspired Severe Illusion, but he also got recognition as ambient artist involved in Knös, Analfabetism. He now strikes back with a new Instans full length, which is not exactly a forgotten project, but definitely one band electronic lovers has to rediscover. The new opus “Derailed” released on Advoxya Records is a cool and somewhat vintage (90s)-like work, which I’m sure will increase the popularity of Instans.

Q: Fredrik, you’re involved in multiple bands dealing with different styles so what does Instans stand for and what’s the specific sound DNA of this band?

Fredrik: For a long time, we have told people that Instans is just another name for the same thing we do under the Severe Illusion flag, so to speak, and very metaphorically. That, however, is a lie. So in that sense, Instans is a very dishonest band. Another interesting fact is that I have made the last two albums all on my own, so Instans is not even a band. It is just one, confused, middle aged Scandinavian lunatic and his pile of old machines these days.

Q: It might explain why Instans doesn’t release new work at regular basis, but what inspired you to start composing new material?

Fredrik: Just squeezing out a new album every six months is of course a possibility, but it would be as boring for me as for the listeners. I like to give it a few years, so the ideas behind the next album can grow for a while in my head. I tend to do this for all of my projects, and now it was finally time for a new Instans album. I had some ideas worked out just when Dima from Advoxya emailed me and suggested we’d work together on a new release. Sometimes someone has to kick me in the butt, pull my arm, or whatever. Now Dima did.

Q: So how did the writing of “Derailed” happened and what have been the main difficulties you encountered?

Fredrik: “Derailed” is a double CD, and the first one just came out of the plan I had in my head. You could say, this is what my brain looked like on the inside some time late 2015. Then I went over to Vancouver, BC, for a while and played a couple of shows with Analfabetism in the United States. Disc number two is really from there. Also all the photos in the booklet are from the beautiful city of Seattle. So the other CD is what my brain looked like, from time to time, while in North America, and the artwork represents the surroundings of my brain at the same time.

Q: Sound-wise I experienced “Derailed” as an interesting mix of EBM with a typical dark 90s flavor on top plus some minimal sound treatments. Does this description fit with your own perception and can you tell us a bit more about the different ingredients running through this work?

Fredrik: The previous two albums have been made with some very basic synthesizers, and fairly mainstream software. With “Derailed” I wanted to recreate that sound with modular synths. The idea was to get the sound of the future, as I would have imagined the future back in the cold war days. Anyone old enough to remember the 80’s should know, that by 2016 we were all going to be dead. Either from Soviet hydrogen bombs, or a new, man made ice age. Or both. I wanted the album to sound like that, and I think I did quite well.

Q: I’m fascinated by your remix of “Metastatic Driveway”, which was done under the Severe Illusion flag. How is it remixing one of your bands by another one you’re involved with?

Fredrik: Technically, neither Instans, nor Severe Illusion is a band. It is really just me these days. Live shows are a very different thing, then we’re a whole bunch of people. But when I do a remix as Severe Illusion, I just use a different set of instruments and work with Severe Illusion recording techniques and so forth. I drink far too much coffee, regardless if I work on a piece for Severe Illusion or Instans.

Q: How do you see Instans evolving during the next few years and what might the fans expect regarding concerts, remixes ao?

Fredrik: I am very happy with how the new album turned out, and with the resposne I’ve had so far. I hope sometime early next year I can start working on a follow up. I have received a few offers from clubs and festivals, and I hope around October or November there will be new live shows from Instans again.

Fact is, Instans has been only a studio project for a long time. I played a few shows in Russia and Sweden with Ulf Lundblad when we were still a proper band, and then me and a certain Janina Danes had the opportunity to play a show in Santiago de Chile three years ago. I am currently putting together a new live show, possibly together with Ulf again. Instans is certainly on it’s way back.