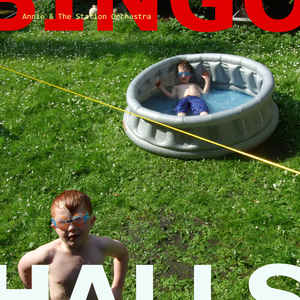 Background/Info: Annie & The Station Orchestra is a Scottish formation. They already released a split album together with Ippu Mitsui and unleashed their official debut album “Bingo Halls”.

Content: The very first passages of this work are pretty Laibach-like. It’s filled with bombast and epic arrangements, but rapidly moves into a rather abstract composition with guitar, drums and psychedelic effects. We can consider “Bingo Halls” as an instrumental work although you’ll discover a single cut with female vocals. It’s a weird production, which has nothing in common with current trends and established genres.

Annie & The Station Orchestra deals with an atypical and hard to define sound. It’s definitely experimental, sometimes a bit reminding me of krautrock formations and also cinematographic.

+ + + : The album sounds as a truly rarity and that’s for sure a real original aspect of the band. It makes me think of a soundtrack for a surreal movie. The cover might be an indication for the atypical sound. The main strength of Annie & The Station Orchestra definitely is that this album doesn’t sound like any other! It’s a psychedelic voyage carried by outer-space sound treatments.

– – – : My main regret is that the opening part in the truest Laibach-style, only lasts a few seconds. This is the kind of work appealing for a visual support… or vice versa. You definitely have to like experimental music to enjoy this record.

Conclusion: Experimental music always has something visionary, but I have some reservations about the real impact of this record now and within a couple of years. It rather sounds as a piece belonging to a wider- and total concept featuring other artistic disciplines.