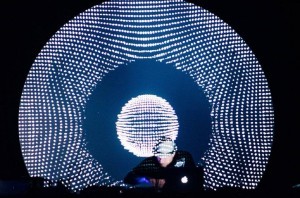 Based in Kiev (Ukraine) Oleg Puzan aka ‘Dronny Darko’ set up his drone-ambient project in 2014. In a short lapse of time he released an impressive number of productions on different labels. His newest album “Spira Igneus” released on Cryo Chamber reveals the growing genius of this musician. Time for some more information about Dronny Darko.

Q: How did you get interested in dark-ambient music and what have been your main references in the genre?

Dronny Darko: I think it all started with a more traditional side of ambient. As a teenager I was growing up on metal music, but always had this interest in electronics. I liked blending of genres a lot. Eventually it was mathcore and breakcore that sculpted my music vision and had a great impact on what I do today. Those genres sorta taught me to think from an artist perspective since they are so abstract and represent this tasty juice of inspiration that is endless. Of course they are too far from ambient, but then I needed something as a contrast.

Of course at that time I knew who Lustmord was, but it was not my cup of tea. In a few years though I remember I discovered Red Fog on SoundCloud and his music completely blew me away. I’m not actually that much into dark-ambient really. I like the drone side of things. Something that keeps you immersed and consumed. Drone-ambient was definitely a perfect thing at that moment. I think I just needed something like this. Something meditative, calm and inviting. I still have that Red Fog’s track on all of my phones. I think it never left my audio library from that day. The impact was really huge. For now I can say that Red Fog, Lustmord, Thomas Köner, Mathias Grassow, Alessandro Cortini, Steve Roach, Sabled Sun, Yann Novak and protoU are the main characters that influence my music.

Q: I can imagine the band name Dronny Darko reveals some of your main influences, which are drones (Dronny) and dark (Darko) music, right? What is it all about?

Dronny Darko: As you might have guessed, it all started from the movie. I really enjoyed it and at the time I watched it, I was into drone and this film kinda reflected this whole idea of it. I thought it would be an interesting nickname. Although now once I got introduced to this many different styles of experimental music, I just think one project will simply not be enough. I already start to blend elements from different sub-genres of ambient and electro-acoustic music into my creations which is not always a good thing. Thought I still have a lot to say as Dronny Darko.

In the future I will split my sound within a few projects so that fans could embrace the esthetic they prefer more easily.

Q: You’re a prolific artist who has released an impressive number of productions in a rather short lapse of time. How do you explain this productivity and what means music for you?

Dronny Darko: I really am not sure how to explain why I produced that much. I don’t even think it’s a lot actually. Sometimes I stumble upon artists that create one album every season. That’s what I call fast 🙂 But mostly all these albums were made long time ago. All the tracks were just remixed in a way they reflect my present tastes and then it’s an album. This year there will be 2 collaborations released that were made 2-3 years ago, but for random reasons were not published. I also try to release a healthy amount of music to make my fans happy.

Q: What is your newest album “Spira Igneus” all about?

Dronny Darko: Mostly it’s like a continuum of “Outer Tehom”. Same vibes, same theme, but more focused on an individual. This burning spirit. Huge as a spire, passionate as fire! It’s also about having this spire inside of you and not let any events to destroy it. Seek it out and be rewarded with a sense of oneness, and that’s really one of the best rewards of art and music in general —connection with something timeless.

Q: I experienced this new album as your most accomplished and simply ‘best’ album to date. What’s your own perception and especially your evolution as artist/composer over the years?

Dronny Darko: Thank you! This album is also a mix of tracks that I composed around the same time I was working on“Outer Tehom”. Only 2 new tracks are on the album. All the rest are the ones that passed the test of time. And yes I like it as well 🙂

As for the evolution, it’s something inevitable I would say. If you’re serious about what you do – you will be growing no matter what. You’ll engage a broader vision of things that will challenge you. That said, it is good to focus on specific disciplines and develop your skills. Learn the rules, stay free in your mind, and know when and why to break them. It gives you power.

Q: Do you have a specific way of working/procedure when composing an album and what are your favorite studio tools?

Dronny Darko: In terms of ambient music, being calm and having a proper quiet surrounding works the best for me. I also noticed that my best sketches are created when it’s either night or almost morning when I just cannot fall asleep. I have this weird state of mind when you’re supposed to be in bed, but you just got sick at staring at the ceiling for 2 hours. Then something magical happens. I love this process. Making music. I still cannot figure out how it all floats out of me. I never had any tuition in any instrument or musical theory. I just feel it. This abstract glowy energy that fills my head when I create drones. Like a connection. And isolation. At the same time… Luckily now I have protoU around and she can tell me where is the wrong note if I want to create a musical piece for example haha. She’s a very talented and lovable alien. Probably she indeed is my favorite ‘tool’ in the studio 😉