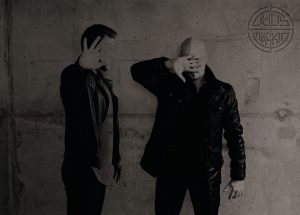 Norwegian duo Dødsmaskin saw the daylight at the end of 2014. Peter Vindel and Kjetil Ottersen started composing ‘noise orientated drone’ music. They recently released their official debut album “Fullstendig Brent” on Malignant Records. This opus took me by surprise for its accessibility and originality. There’s a real creative mix featuring dark-ambient atmospheres, industrial elements, drones and even a kind of neo-classic flavor recovering the tracks. “Fullstendig Brent” is one of the best productions in the genre I’ve heard during the past months so I wanted to know a bit more about Dødsmaskin.

Q: Dødsmaskin is a rather ‘new’ name active at the wider fields of noise/ambient/drone music. How did you get contaminated by this dark music virus and what kind of music project did you’d in mind when setting up Dødsmaskin?

Peter: Kjetil and I met 16 years ago and at the time we had just discovered artists like Converter and Mz.412. We started experimenting with noise and drone and our music became more and more eccentric. After a while, we had travelled so deep down the rabbit hole that we basically had no choice but to form Dødsmaskin.

To me it just feels natural when I write for Dødsmaskin. It’s liberating in a way that we don’t have to worry about trends, radio airplay or what people think of our music. Don’t get me wrong, I am very happy about the reception of our album, but if no one liked it we would still make the same sounds as we do today.

Q: Getting signed on Tumor/Malignant Records must be for sure a consecration. How does it feel and what does it mean for your artistic evolution?

Peter: Malignant Records are excellent to work with. To have a professional partner to promote and distribute our music means that we can focus more on the music part.

Q: How would you introduce your official debut album “Fullstendig Brent” to readers who never heard of Dødsmaskin before?

Peter: We describe ourselves as a noise-oriented drone act. We are often labeled as death-industrial as well.

Q: Tell us a bit more about the writing process properly speaking and especially about the mix of harsh noise/industrial elements together with somewhat neo-classic inspired passages?

Peter: It usually begins with a conceptual layout and sound design to create a basis to work from. How the mix of different elements will turn out depends a lot on the concept.

Q: How do you transpose the theme hiding behind this work dealing with witch trials in Norway during the 17th Century into music?

Peter: The witch trials represent one of the darkest chapters in Norwegian history, so the interpretation into music came along quite naturally once we started. I feel the sound on our album is a proper illustration of what occurred back then.

Q: I noticed you were really honored to compose a track together with Nordvargr for the “Recrudescence”-compilation. How did it happened and what did you keep in mind from this collaboration?

Peter: As mentioned, Mz.412 as well as Nordvargr (in addition to several other old-school Nordic noise and drone acts) have been influential on our musical life. I have personally been following Nordvargr on Instagram for a while and we have communicated on a few occasions there. When both Nordvargr and Dødsmaskin happened to be on Malignant Records at the same time, it felt right to approach him about a possible collab on this compilation.

Since you’re here … … we have a small favour to ask. More people are reading Side-Line Magazine than ever but advertising revenues across the media are falling fast. And unlike many news organisations, we haven’t put up a paywall – we want to keep our journalism as open as we can. So you can see why we need to ask for your help. Side-Line’s independent journalism takes a lot of time, money and hard work to produce. But we do it because we want to push the artists we like and who are equally fighting to survive. If everyone who reads our reporting, who likes it, helps fund it, our future would be much more secure. For as little as 5 US$, you can support Side-Line Magazine – and it only takes a minute. Thank you. The donations are safely powered by Paypal.
Tags: Dødsmaskin, Nordvargr