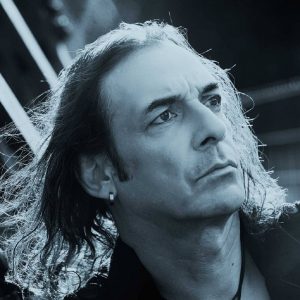 German musician and singer Markus Wild got involved into music during the 80s. He got some fame as front man of The Cascades and started a solo-project in 2015 as. M.W. Wild. The ‘M’ stands for Markus’ real forname while the ‘W’ stands for an old nickname he doesn’t want to mention. Wild is his real name. Markus didn’t want a new band name, cause deep in his heart there still exists a band, The Cascades (set up in 1988), which remains his one and only baby. He recently released his debut solo-album “The Third Decade” on Echozone revealing a great song-writing, which will appeal for lovers of 80s new-wave music.

Q: Markus, how did the move from The Cascades towards your solo-project M.W. Wild happened and how did it feel to do everything on your own now?

Markus: I stopped my work with The Cascades in 2006 because of some internal disagreements. So I said stop, no more music, enough and goodbye. But as a musician you can’t stop playing and singing so I built up a small studio in my house and started making music on my own, just for fun.

End of 2015 I’ve been very close to death and I decided in the hospital that if I ever would  be able again to sing and make music, I will produce a new album. Answering your question about the feeling to do it alone, it felt good in the beginning, cause nobody could cross my ideas. But after take Nr. 53 I sometimes felt sad and was dreaming of a good guitarist, keyboarder, drummer, bassist and producer. – BUT I DID IT and I’m still proud of it.

Q: What is your album “The Third Decade” all about and what does the title stands for?

Markus: The 13 songs on the album are a little bit the summary of the film I saw at the ICU in the hospital. It’s about my hope, my fear and my political attitude. I always used songs to give my opinion so the lyrics are very important to me and I do not  want to sing about love and witches all the time.

The title stands for 30 years M.Wild as a singer. During the first two decades I’ve been involved with The Cascades and now I’m busy alone for the third decade.

Q: Your influences clearly sound very new-wave/gothic/80s like. Was the music better back in time and how do you transpose these influences into your own sound?

Markus: I don´t think music was better in the 80s. Maybe it was more open and true. I never thought about the style I want to produce, I just did it and will do it the same way in the future. My music is not composed to be gothic-like or any other style. I record a song and when I like it. In the end when it’s finished I don’t mind if it sounds goth, wave, rock, English or German.

Q: About this 80s touch, the info sheet of your album made by Echozone claims that you are ‘able to not only revive this special sound, but to give it a breath of fresh air’. What is this ‘breath of fresh air’ all about and where can we find it in your music?

Markus: This is a sentence from Echozone. I think they mean that my sound is not only completely old-school like and not always the same old chewing gum as you can hear it from other bands. But I am not quite sure. Maybe it´s just me as ‘new fresh man’ in the goth scene… … haha, new! – fresh! I am 50.

Q: I experienced the melody lines during the choruses as a real essential aspect of your work. What do you consider as the most essential aspects of “The Third Decade” and what have been the main difficulties you encountered in the writing process?

Markus: First of all, I love melodies and they’re taking most of the time of my work. “The Third Decade” was written, produced, recorded and mixed between April and October 2016. I didn’t really encounter difficulties, I had so many ideas so I came in a flow I never had before. It was a 247 job over six months, but I loved it. I think, every musician’s dream is to have the time for working and thinking about his ideas. I had this time and this peace of mind, – thanks to my wife and my two dogs for their patience.

Q: What are the plans regarding live performances, new work, eventually side-projects?

Markus: In 2018 I will be back on stage with THE CASCADES to celebrate our 30-year anniversary and will play some festivals in Summer (if you have any ideas please tell me!). We will play old and new songs; Cascades songs and of course some songs from “The Third Decade”-album.

There will be a double CD with a mix of ‘best of’, unreleased- and new songs. About my solo work as M.W.Wild  I’ll release a new album of course! I’ve already new songs in my head. After “The Third Decade” it is time for “Phase 4”.