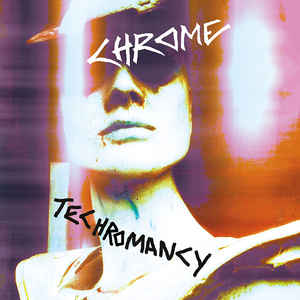 Background/Info: More than 40 (!) years after their original set up the legendary punk formation Chrome unleashed its 21st studio album. The songs have been composed by Chrome and Helios Creed.

Content: The ‘chrome’-like cover of the album clearly indicates that we’re holding in our hands a new album from the one and only Chrome! Chrome somewhere remains faithful to their punk-roots, the songs being supported with some 80s nostalgia. The production is a mix of post-punk and punk-rock, but you also will notice a few industrial elements running through the album. From fuzzy guitar parts to dark and tormented passages this work clearly has a lot to offer.

+ + + : Chrome still has this creative spirit to compose a very unique music style. This is a band with an own sound DNA and that’s for sure what have been made them ‘legendary’. I especially like the somewhat retro-80s like feeling emerging at the surface of some tracks. It evokes some good-old souvenirs, sometimes reminding me of other legendary bands in the genre. But Chrome is a band that moved on, exploring new ideas and music horizons. It probably explains the more industrial style running through a few cuts. “Time Slider” is a cool cut to discover.

– – – : I can’t say that there’s a real hit song featured on “Techromancy”! But the real element I don’t really like that there are the little intermezzo’s/breaks on the album, which are short and without any real addition to the album.

Conclusion: After more than 40 years of involvement, Chrome still has new ideas to put into music! From traditional punk music to a more contemporary format this band is still alive and kicking!