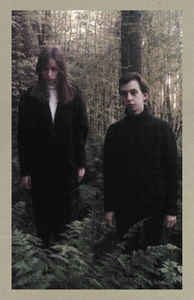 Background/Info: Sobranie 8 18 is a Russian duo, which I discovered by this album released on cassette format and strictly limited to 40 copies! A first cassette was already released on Perfect Aesthetics.

Content: It’s not that easy to define the sound of Sobranie 8 18. The female vocals have something ethereal while the music is mixing dark atmospheres, ritual passages and electronics.

+ + + : Sobranie 8 18 sounds as a pure underground project and that’s an aspect I rather appreciate and like. It reminds me a bit –also because of the cassette format, to the late 80s and 90s period when bands were much more into creating a personal sound. There’s an artistic creativity emerging at the surface of the work and I especially like the cuts on the A-side. There’s a very efficient fusion between ethereal-like vocals, dark atmospheres and electronics. There’s a bewitching side empowered by the vocals, but still by some musical delicacy.

– – – : Pure underground music not always is the most accessible one to seduce people while the limited edition of 40 copies will rapidly make this album hard to find. The good news is you can still purchase the work on digital format.

Conclusion: There are some real cool elements running through the mysterious sound universe of Sobranie 8 18, which is a nice and ensorcelling experience I hope to hear more from!