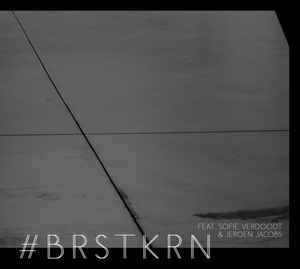 Background/Info: This Belgian project is the meeting between Bart Desmet better known as Barst (BRST) and drummer Karen Willems (KRN) and features female poet Sofie Verdoodt and photographer Jeroen Jacobs. This is the self-titled debut work of this somewhat improvised collective, which was recorded in a kind of garage/hall in just one day.

Content: This work is a kind of improvisation, which clearly sounds experimental and abstract-like, but still featuring elements of industrial music and apocalyptic- and/or krautrock. The work consists of one single cut that has been progressively built up, revealing different passages on, which drums, electronics and guitar playing join in. But there also is the Flemish poetry of Sofie Verdoodt, which totally fits with the experimental approach of the sound.

+ + + : To be honest, I’m not a huge fan of improvised music sessions resulting in a record. I however have to admit this work features exciting passages, the music being progressively built up and harmonized between both musicians. The poetry adds something dramatic and mysterious to the sound. It sounds dark, a bit painful and existential, but still a deeper reflection of the society we’re living in. I also have to say a word about the artwork. This album is a digipak featuring an inside booklet with pictures of the artists during the recording session.

– – – : This is the kind of work appealing for a restricted number of music lovers, but in the end I’m sure there’s an audience for this kind of experiment. It however is the kind of release you gone like or not; there’s no way in between.

Conclusion: Experimental music can be fascinating and especially diversified. It also reveals a kind of artistic concept between different artists and that’s an experience I’ve always loved and supported.