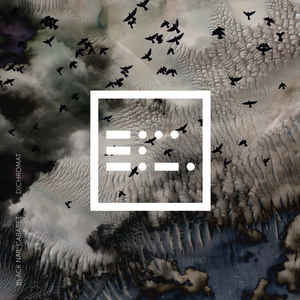 Background/Info: London based duo Emese Arvai-Illes (vocals) – Krisztian Arvai (music and production) released the Dichromat album back in 2016. It’s the band’s third full length album and even if this work is somewhat outdated I couldn’t resist reviewing it.

Content: Black Nail Cabaret remains a kind of alien active in the wider fields of electro-pop music. It’s somewhat old-styled electro-pop reminding me of melodies à la OMD and the melancholia of Wolfsheim plus a very own and delicate touch supporting the songs with grace. The vocal parts remain pretty particular as well. This is not the typical female like pop-singing, but there’s a part of mystery hiding behind this singer’s voice.

+ + + : I like Black Nail Cabaret’s originality, but especially the graceful and refined pop approach they compose. It’s an emotive release, but still a beautiful work carried by strong melody lines and the magic vocals of Emese Arvai-Illes. It more sounds like music to listen and enjoy instead of danceable electro-pop.

– – – : “Dichromat” clearly doesn’t sound like the classic electro-pop band. That’s a rather positive and original aspect, but still not easy to catch their sound. It’s not exactly the kind of band that will hit dancefloors and compose catchy pop songs that will enter into the collective memory of electro-pop freaks. That’s what I’m missing but in the end I would say it’s probably better to discover an original formation instead of a classic production without a real sound DNA…

Conclusion: If you like electro-pop, but you’re tired of the stereotypical sound formulas and other Depeche Mode clones, this band will serve you a very efficient antidote!

Since you’re here … … we have a small favour to ask. More people are reading Side-Line Magazine than ever but advertising revenues across the media are falling fast. And unlike many news organisations, we haven’t put up a paywall – we want to keep our journalism as open as we can. So you can see why we need to ask for your help. Side-Line’s independent journalism takes a lot of time, money and hard work to produce. But we do it because we want to push the artists we like and who are equally fighting to survive. If everyone who reads our reporting, who likes it, helps fund it, our future would be much more secure. For as little as 5 US$, you can support Side-Line Magazine – and it only takes a minute. Thank you. The donations are safely powered by Paypal.
Tags: Black Nail Cabaret, OMD