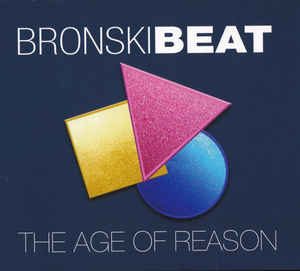 Background/Info: “The Age Of Reason” is the first ‘new’ Bronski Beat album in 22 years. It all started with the album “The Age Of Consent” (1984). The album became a cult full length thanks to legendary hits such as “Smalltown Boy”, “Why?”; “It Aint’s Necessarily So” ao. Steve Bronski, Larry Steinbachek and of course singer Jimmy Somerville instantly became new idols of electro-pop and ambassadors of the homosexual community.

This legendary work has been now reworked while the second disc also features two brand new songs plus a cover version. Steve Bronski recovered Bronski Beat from the dust teaming up with Ian Donaldson and singer Stephen Granville.

Content: It’s nearly impossible listening to this album while taking distance with the original versions which simply are part of the collective memory. The songs have been reworked and mainly adapted into a ‘modern’ edit. The music became more groovy and into dance-pop. Stephen Granville of course does not have Jimmy Sommerville’s timbre of voice although he’s a great singer. You constantly have to face the idea this is the 2017-edit of an album that was composed in the magic decade of the 80s.

The second disc first reveals a cover version of Patrick Cowley’s “Stars”. This is a clubby adaptation of an old disco track revealing the ‘new’ Bronski Beat. You definitely will discover a side of the band you maybe didn’t ever expect to come true. “I’ll Be Gone” and “A Flower For Dandara” both are great and groovy dance cuts. All the songs have been remixed, mainly reinforcing the club-direction of these songs. Remixes have been made by Sordid Soundz (aka Ian Donaldson) and Qubiq.

+ + + : The magic of the 80s was something unique because electronic music was something new and even revolutionary. Bronski Beat entered into history and their original hits are still hot stuff on parties of today! This reworked and adapted album doesn’t want to emulate this magic, but reveals that it’s possible to rework “The Age Of consent”-album into a modern and danceable work. I like the ‘new’ versions of “Love & Money”, “Junk” and “Run From Love” (originally released on “Hundreds & Thousands”). The work also features the songs “No More War” and “It Ain’t Necessarily so”, which have been mixed in one song.

Among the new song I especially like “I’ll Be Gone” while “Stars” is a great cover version. I noticed two great remixes of “I’ll Be Gone” by Sordid Soundz.

– – – : I don’t say that this ‘new’ work will be banished by the die-hard fans, but “The Age Of Reason” clearly sounds different from the original work. The analogue magic of the sounds and Jimmy Sommerville are missing especially on the greatest hits “Smalltown Boy” and “Why?”. The groovy turnover clearly sounds into modern hypes and might be an opportunity to discover Bronski Beat by younger fans, but I can’t imagine the die-hard fans will be totally convinced!

Conclusion: Bronski Beat is alive and the best way to fight back was probably to rework and re-edit their most famous album in history plus adding a few new cuts. I’m not saying it’s the most successful way, but globally speaking I rather enjoyed “The Age Of Reason”!