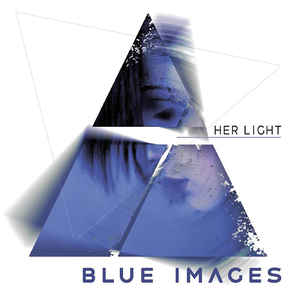 Background/Info: It all started in 2013 as a solo-project, but New-York (USA) based Blue Images finally became a duo. They signed a label deal with Scanner to release this first official work featuring 12 songs.

Content: “Her Light” is a pure electro-pop oriented work with a wink to the 80s new-wave music. The songs are inspired by retro-like synth lines. Some of the songs are carried by a harder and danceable kick, but there also is a softer side running through the production, which is more into melancholia.

+ + + : Blue Images first of all stands for beautiful synth-pop music. Mainly inspired by 80s reminiscences, the tracklist is switching from danceable songs to sweeter, easy listening cuts. I especially like the refreshing effect from songs like “Irrational Thoughts” and the harder “False Illusion” featuring Jürgen Engler. The last mentioned song is also carried by a solid bass line.

– – – : The album is fully enjoyable, but doesn’t bring that much innovation in a music genre, which unfortunately already features a countless list of bands sharing the same passion for synth-pop music.

Conclusion: If you’re a synth-pop die-hard fan you for sure are going to like this album, which is fully entertaining, featuring noticeable guest singers and a few cool songs.